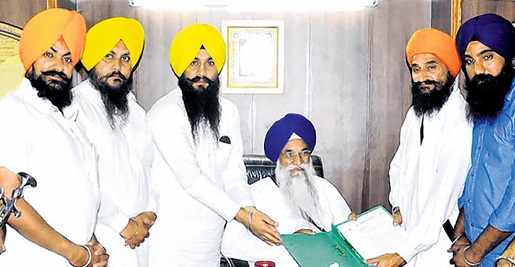 Comments Off on Takht : Efforts on for release of Sikh detainees 405 Views

Amritsar, Punjab: Akal Takht Jathedar Giani Gurbachan Singh today said they were making sincere efforts to meet the demands of Bhai Gurbaksh Singh Khalsa who had resumed his hunger strike for the release of Sikh detainees in Ambala.

The Jathedar said he had taken up the matter with the state government, which would soon approach the Union Government on the issue as most of the cases of Sikh detainees came under its purview. He said he had also forwarded the representation given by Gurbaksh Singh to Chief Minister Parkash Singh Badal who had taken a sympathetic view of the matter. The AISSF has extended its support to Gurbaksh Singh while appealing other organisations as well to come out in his support.

The health of Gurbaksh Singh has been deteriorating as his fast entered the eight day today. When contacted, he was not in a position to talk on phone. His spokesperson Amritpal Singh said they were yet to receive any response from the Akal Takht Jathedar whom Khalsa had met on October 19 regarding the issue of Sikh detainees. He also lamented that they were not provided any space in Punjab to stage their protest, which forced them to hold it at Gurdwara Lakhnaur Sahib in Ambala. He claimed they were also receiving threats from certain people who did not want their protest to continue.

He said they had received support from political parties like the BJP and the SAD (Amritsar), though nobody from the SAD (Badal) came to them.