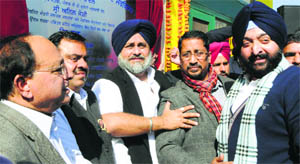 Talking to mediapersons after inaugurating the City Bus Service here today, he said it was shocking that Rahul had not bothered to apologise to the Sikhs for the “genocide.” He asked the courts to take suo motu notice of his “confession”, which was an admission of the “barbaric crimes” against the Sikhs.

“His admission has vindicated our stand. We’ve always held that Congress men were involved in inciting riots against the Sikhs in 1984. Rahul Gandhi’s father even justified the violence against the Sikhs, stating that when a big tree falls the earth shakes,” he said.

To a question, Sukhbir said the SAD would examine the possibility of taking legal recourse against the Congress. “Punjab Congress leaders should quit the party en masse as a mark of protest.”

Ridiculing Rahul for his “hollow” claim that the party would punish Congress leaders found guilty in the Sikh genocide cases, Sukhbir claimed that those who had instigated the carnage were “always intentionally shielded” by the Gandhi clan.

“Failure to punish the guilty and rewarding killers with high offices shows the real face of the Congress,” he remarked.