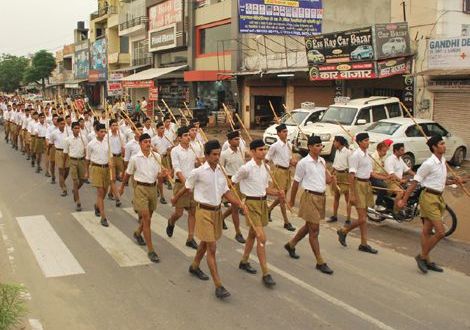 Comments Off on Stop RSS processions in Punjab – Communist Party of India 1,149 Views

Chandigarh, Punjab: The CPI and the CPM on Tuesday demanded a ban on the RSS processions in Punjab, expressing their reservation over the manner in which the RSS cadres flaunted swords and weapons in bazaars and raised “communal slogans”.

The two left parties also announced their ‘chetavani’ rally to be held in Ludhiana on November 28. The CPI-ML (Liberation) and CPM-Punjab have also joined hands with the two major left parties for the rally at a joint press conference here.

In a joint 14-point demand charter, the parties demanded the withdrawal of the Punjab Prevention of Damage to Public and Private Property Act-2014 and the property tax being imposed among others. Punjab CPM secretary Charan Singh Virdi said the left would contest the upcoming elections on the plank of their charter.