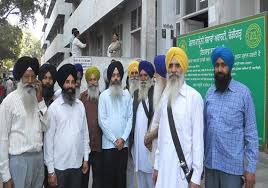 Amritsar, Punjab: Radical group Dal Khalsa has accused both the Congress and the BJP for “indulging in immoral trafficking of Sikh pain and using it as a political bargaining tool ”in the ongoing election campaign.

In a joint statement here on Sunday, Dal Khalsa chief HS Dhami and spokesperson Kanwar Pal Singh said: “As the elections are drawing closer, both the parties were playing bad politics on Operation Bluestar and the 1984 Sikh genocide.”

They warned both the parties not to play politics on Sikh emotions and pains and desist from touching the sensitive nerve of the community.

Holding both the parties equally responsible for sacrilege, they said, “The Hindutva forces instigated the Congress-led government to attack the Golden Temple (1984), while the Congress sinned by ordering the attack on holiest Sikh shrine. The BJP distributed sweets on the streets of Amritsar to rub salts on the wounds of the Sikhs.”

The Dal Khalsa leaders said the recent disclosure about complicity of the British government, on the one hand, and the suspected and dubious role of chief minister Parkash Singh Badal and former governor Surjit Singh Barnala in the army assault, on other hand, had given a big jolt to the Sikh trust.

“On the one hand, Sikhs are at pain that even after 29 years of the carnage, the perpetrators of the 1984 genocide have not been brought to book. On the other, the Congress and the BJP-SAD combine were working on the agenda to cash the emotions, ”they added.

“Sikhs don’t care what the Congress or anybody else thinks. We will not let our protest rest till the killers of the 1984 episodes are brought to justice, ”they added.

They termed the Badals as “shame proof”, who were leaving no stone unturned to ensure the victory of BJP’s prime ministerial candidate Narendra Modi, the man who was allegedly responsible for gross human rights violations against members of a minority community.

They also referred to the victimisation of Sikh farmers in Gujarat and the failure of the Shiromani Akali Dal (SAD) and chief minister Parkash Singh Badal to address their grievances before Modi and the Gujarat government.