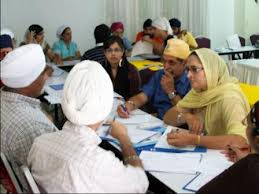 Raikot, India: Shri Guru Granth Sahib Ji Academy, a socio-religious organisation, working from Gurdwara Sant Ashram Bhaini Baringa, is determined to put an end to the anti-social elements in the district by spreading teachings of Guru Granth Sahib among the masses, irrespective of caste and creed.

The organisation has its headquarters in Malaysia and has taught Sikh history and Guru Granth Sahib to over 35,000 youths.

Declining moral values, disrespecting parents, drug addiction, female foeticide, eve teasing and gender discrimination are the major social evils which need to be curbed, said a member of the organisation.

Baljit, a graduate in Sikh religion studies, said a team of over 20 teachers are imparting training to students at schools. Complete course requires four years of regular training in a phased manner, added the chief organiser.

No government or non-government agency has ever helped the organisation in this noble venture so far. Donations by sangat and contributions from parent body help the academy to meet the expenses, said a member.

Previous: Youth reunites with uncle after 20 yrs – Story of a Sikh Orphan
Next: Rare sword of Sikh Maharaja Ranjit Singh to be auctioned on 18 March 2014