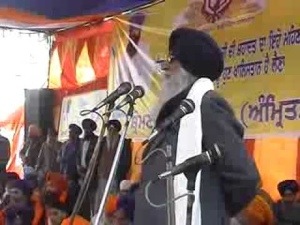 Comments Off on Simranjit Singh Mann party will not allow Modi to hold rally in Punjab 1,404 Views

He called Modi “a murderer of Muslims”. He said the “communal” Modi Government had uprooted 60,000 Sikhs from Gujarat.

By inviting Modi, Chief Minister Parkash Singh Badal was trying to vitiate communal harmony in the state, he alleged.

“Badal has no right to call himself leader of the Sikhs as he failed to get justice for the 1984 genocide victims during the NDA regime. He did not ensure the release all Sikh detainees languishing in various jails,” Mann said.

He said the UK Government had betrayed the Sikhs by helping the Indira Gandhi Government to conduct Operation Bluestar.

On the occasion, a resolution was passed demanding that the United Kingdom courts reconsider the punishment awarded to four youths for attacking General KS Brar. Another demanded a CBI inquiry into the drug trade in Punjab and the scrapping of the Bikrami calendar.

Previous: Tough life of Afghan Sikhs – Neglected by Sikh Community
Next: Captain: My stand on Army action has been unambiguous