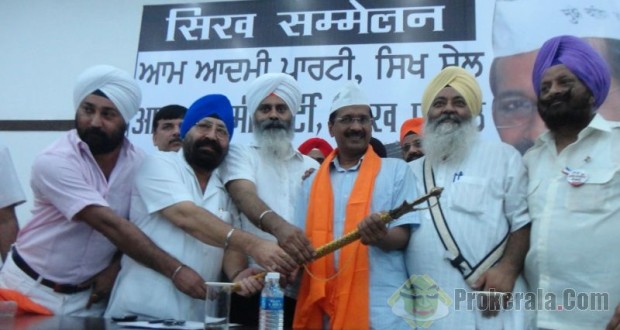 Amritsar, Punjab: The Sikh Genocide in 1984 has always been used as a rallying cry by Akalis for decades, with the issue of denial of justice being highlighted every election or to target the Congress, but majority of those spearheading the fight for ensuring justice to the genocide victims have chosen not be part of SAD (Badal), which claims to be sole custodian of interests of the Sikhs, but have opted for a new outfit like Aam Aadmi Party (AAP).

Supreme Court senior advocate H S Phoolka, who has been waging a legal battle for the 1984 genocide victims, and former journalist Jarnail Singh, who threw a shoe at Union minister P Chidambaram in 2009 prior to the Lok Sabha polls after Congress decided to field Jagdish Tytler from one of the seats in Delhi, have joined AAP. While Phoolka has been made the AAP candidate for the Ludhiana Lok Sabha constituency, Jarnail has been fielded by the party from Delhi (West) seat in the coming general elections.

Another key face of the fight for justice Nirpreet Kaur, who lost her father in the massacre and sat on a hunger strike at Jantar Mantar in May last year demanding justice for the victims, is all for AAP. “Congress killed us, SAD-BJP did little to ensure justice, but Kejriwal formed a SIT within a month of his government coming to power and even supported commutation of death sentence to Devinderpal Bhullar. It gives me all reasons to go with AAP,” she said.

Even several Punjab-based Sikh activists have been extending support to AAP. A party leader from Delhi said, “Earlier, all of them had affiliation with SAD, now they are joining us. During the Delhi assembly elections they looked at AAP as a third alternative after both Congress and BJP/SAD desperately failed to deliver results.”

“After Arvind Kejriwal’s government decided to form a special investigation team (SIT) to probe the closed cases of the 1984 massacre as promised in its manifesto, the victims and Sikhs realized that AAP was honest in its approach. Though SAD championed the cause in Delhi and Punjab, it did not go much beyond lip service. SAD promoted nepotism and even rewarded several people (DGP Saini) who worked against Sikhs openly, but it never took any activist on board either in Punjab or in Delhi,” said Punjab Human Rights Organization (PHRO) general secretary Gurbachan Singh, explaining why activists chose AAP. “Even in the Devenderpal Singh Bhullar case, it was Kejriwal who wrote to the President for commuting his death sentence. The SAD government had maintained an ambiguous stand on him, and had opposed him in the Supreme Court,” he pointed out.

SAD (Delhi) president Paramjit Singh Sarna, a rival of Badals, said the Akali leadership was worried about AAP. “It was clear from SAD president Sukhbir Singh Badal’s attack on Phoolka. SAD is of the view that if justice is delivered, Badals would lose an issue they had been using in successive elections. Moreover, the credit would also go to AAP, which apart from forming the SIT, also has on board some known faces of the 1984 genocide victims’ battle for justice.”