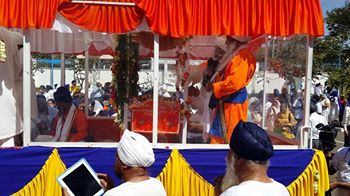 Kenya: Members of the Sikh community in Kenya celebrated 100 years with a Nagar Kirtan from the historic Sri Guru Singh Sabha Gurdwara.

The Nagar Kirtan comprising of members of the country’s Sikh community along with trucks, tractors and even tankers made its way through downtown streets to Guru Nanak Darbar Temple in Milimani and back.

A plaque at Kisumu’s Sri Guru Singh Sabha Gurdwara indicates that Sardar Attar Singh, whose title is given as Permanent Way Inspector of the Uganda Railway, laid the temple’s foundation stone on 21 December 1913.

A hundred years ago, an assorted group of Sikh men, women and children from the then British East African Protectorate, came together with the Nyanza Sikhs in Kisumu to celebrate the laying of the foundation stone for the new Gurdwara.

The simple whitewashed Gurdwara still stands on Mosque Road by the town clock in its original form save for the roof which had to be replaced because it was leaking beyond repair.

The book of minutes for Sri Guru Singh Sabha, Kisumu, dated 19 November 1910 -1916 provides a glimpse into the past of this fledgling community in a new land.

The pioneering Sikhs arrived on the shores of Lake Victoria in Kisumu in 1901, having helped build the Uganda Railway.

They survived the bone-crushing work of clearing the ground for laying the railway sleepers, survived the inhospitable and waterless Taru Desert, the man-eaters of Tsavo, malaria and black water fever, the cold and rain that poured through their tattered tents, and at times thirst and hunger when provisions ran low.

By 1900, the British had established Kisumu as the district headquarters with provincial offices. The harbour was in place with facilities for sea planes to land, but money was always short.

In the book of minutes there is an entry by Waryam Singh, the first secretary of the committee, about the journey to Yala, 40 kilometres west of Kisumu, to raise funds for the new Gurdwara from the Indian community there. It reads as follows:

The Yala Trip — 22.2.1913. “We left on Friday night by moonlight… Didar Singh and I went on bicycles and the others on donkeys.

Ten miles from Kisumu, Didar Singh’s bicycle broke down. We had to walk the rest of the way with him pushing the bike.

The men arrived in Luanda at 4am, seven miles short of Yala and slept there. At 7.30 in the morning, they began walking to Yala to reach by 9am. It rained the whole day.

“At 5pm we congregated at Isher Bishen Das’s shop and made an appeal for the new Gurdwara. We got a lot of donations.

“At 10am on 21st December 1913, Sardar Attar Singh, the Permanent Way Inspector from Mackinnon Station, laid the foundation stone.

“The Sikhs of this place having felt the great urgency of a permanent place of worship of their own in Kisumu have striven during the year to raise a somewhat substantial monument of the Sikh religion in this place and by the grace of the Guru’s the foundation of the Gurdwara has been laid today by Bhai Attar Singh, Permanent Way Inspector of the Uganda Railway, in the presence of nearly all the Sikh residents of the Nyanza Province and the leading members of all the other communities of Kisumu.

“The building plot is secured from the Government on lease for a term of 99 years in the name of the Chief Khalsa Diwan of Punjab.
“Dated this 21st day of December 1913.”

In the end, the construction cost 15,000 rupees with equal sums donated by the Sikhs, Muslim, and Hindu communities.

“This Gurdwara is a super-structure built of concrete. It will stand for another 100 years,” comments Charanjeet Singh Hayer, the present chairman of Sri Guru Singh Sabha.