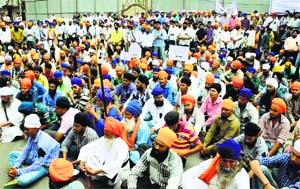 Amritsar, Punjab: Sikhs at Nanded in Maharashtra where Takht Sri Hazur Sahib is situated have come out against the SAD’s alleged move for enactment of the All India Sikh Gurdwara Act. They took out a silent protest march and staged a dharna today.

Addressing the protesters, advocate Madan Mohan Singh said the Akali Dal resorted to such measures whenever the BJP came to power at the Centre. Referring to June 6 clash at the Golden Temple complex, he took a dig at the SAD, saying “Those who could not manage the affairs of Akal Takht are dreaming to take control of all gurdwaras in the country”.

He alleged while apostasy was on the rise in Punjab where the Akalis were at the helm of affairs, the Sikhism was spreading in and around Nanded. Baba Balwinder Singh said the move would further divide the Sikhs. He said the gurdwaras in the other parts of the country should be allowed to manage their own affairs. Earlier, Takht Sri Hazur Sahib Jathedar Giani Kulwant Singh had stated that the Sikh community in Maharashtra was opposed to the enactment of any such Act.

Chief Minister Parkash Singh Badal had recently met Prime Minister Narendra Modi and discussed the All India Gurdwara Act among other issues. The Chief Minister had expressed resentment at the Haryana Government’s move to set up a separate gurdwara parbandhak committee, terming it as “dangerous”. He had urged Modi that Parliament should enact a legislation to ensure SGPC supremacy in areas that come under the jurisdiction of the Sikh Gurdwara Act, 1925.

Jathedar Kulwant Singh said: “We will oppose the move tooth and nail. The SAD move is aimed at bringing all gurdwaras in the country under the control of the SGPC, but we will not allow it.”

Amritsar: Avtar Singh Makkar, SGPC president, on Wednesday termed the Sikh sammelan being organised at Kaithal on July 6 as the “convention of Congress sycophants”. He said all Sikhs should boycotted the convention. Makkar alleged Hooda was playing dirty tricks and resorting to vote bank politics ahead of the Assembly elections in Haryana.