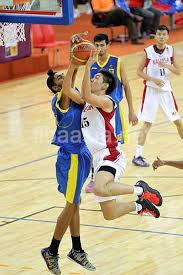 Comments Off on Sikhs condemn FIBA for banning players 273 Views

Jammu, India: Sikh bodies on Monday condemned FIBA’s policy of not allowing players wearing turbans to participate in International Basketball Federation Asia Cup tournament in China and asked them to reverse the decision.

Two Sikh players — Amritpal Singh and Amjyot Singh — were stopped from entering the court minutes before India were to open their campaign against Japan on July 12 at Fiba Asia Cup in Wuhan in China and were asked to remove their turbans if they were to play.

The players, who have always played in turbans, were told that they were in violation of one of FIBA’s official rules, which states, “Players shall not wear equipment (objects) that may cause injury to other players.

“We are concerned about recent reports indicating that Sikhs are not able to participate in International Basketball Federation (FIBA) games while wearing a turban, which is essential to their faith,” Singh said, urging the FIBA to change this discriminatory policy.

“Such act tantamounts to clear cut violation of international human rights”, he said.

Terming it a barbaric and inhuman act, the members urged Prime Minister Narendra Modi and Minister of External Affairs Sushma Swaraj to take up the matter with FIBA and the Government of China.

They appealed to the international community and UNO in particular for immediate intervention in the matter and allowing the Sikhs to wear their turbans and kirpans (religious signs) while travelling in the planes and while performing their duties, he added.

Singh also said that the step taken by FIFA, the world soccer governing body, in which it gave clearance on allowing Sikh players to support their headgear while playing matches is appreciable.

“The ruling by FIFA has come as a relief for a large umber of Sikh players who wear headgears while playing,” he said.

“FIFA has allowed players to support headgears matching the colour of their jerseys. On the other hand the FIBA has not allowed the Sikh players to wear the turbans”, he said.

Singh said they were disappointed that FIBA has delayed their review of a policy that can only be described as “outdated, discriminatory, and totally inconsistent with the ideals of team sports” and urged the board to stop delaying.

The International Basketball Federation had on Thursday announced that it has decided to delay the review of its policy against Sikh basketball players who wear turbans.

Other sikhs leaders in the state also said that not allowing Sikh players to wear their turbans by FIBA had shocked the Sikh community worldwide.

“Career of a number of aspiring players was being threatened by this insane ruling, which needs to be re-considered,” they said.

Sikhs also demanded that the J&K Government shall announce a gazetted holiday on the Martyr’s day of Sri Guru Arjun Dev and Shri Guru Tej Bahadur, as both gurus had laid down their lives for the nation.