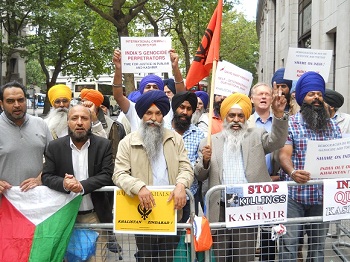 London, United Kingdom: A joint statement issued by the Council of Khalistan, The All Party Kashmir Co-ordination Committee, United Khalsa Dal (UK), Kashmir Advisory Council (UK), Shiromani Akali Dal (UK) and Sikh Student Federation (UK) reads as follows: India’s annual celebration of its independence on 15th August 1947, for all its pomp and ceremony, masks the sad reality of an artificial and failed state that has brutally suppressed the legitimate freedom struggles of Kashmiris, Sikhs, Nagas, Assamese and others since the departure of the British. The new colonialism of Indian rule over the territories of these nations has cost hundreds of thousands of lives and the belligerent recent utterances of the new Hindu nationalist BJP government and its supporters promise more of the same. Within the last week, the head of the RSS (the BJP’s ideological mentor body) has labelled all who live in India as being Hindus by proclaiming “the entire world recognises Indians as Hindus therefore India is a Hindu state …. All those who live in Hindustan are known as Hindus”. Other recent comments include a BJP minister in Goa stating that India is already a Hindu nation and all Indians in Hindustan are Hindus.

Tens of millions of people in these disputed territories are not about to be ‘Indianised’ or ‘Hinduised’, whatever the demented rhetoric of India’s ruling elite. They desire freedom from the Indian state that has oppressed them for decades. They are ready to demonstrate their wishes by taking part in UN supervised referenda, but India refuses them the democratic option. The forthcoming referendum in Scotland is to be contrasted with the violent suppression of democracy in Punjab and Kashmir. It is time the international community took action to deliver what international law promises to these nations; self-determination in their homelands. India’s official rejection of that fundamental right (it signed up to the 1966 Covenants on Human Rights but entered a ‘reservation’ rejecting self-determination) has been officially condemned by Germany, France, Holland, Pakistan and the UN itself. India’s stand on that issue has been underpinned by massive, systematic abuses in Punjab, Kashmir and elsewhere. Notably, a UN demand for a plebiscite in Kashmir has also been openly defied. India must be held to account and forced to end its illegal occupation of Khalistan and Kashmir.

Indian politicians and security personnel will be brought before international criminal courts to answer for the genocide they have carried out. The sudden ‘red carpet treatment’ being offered to Narendra Modi by trade-hungry western governments, in contrast to their previous boycott for his role in the Gujarat massacre in 2002, is an embarrassment which will be punished by Sikh and Kashmiri voters in diaspora communities. The firm rejection of India’s claim to a permanent seat at the UN Security Council together with targeted sanctions is the only means of bringing India in to line with basic international human rights standards. We pledge to pursue our national rights, in accordance with international law, to secure sovereign independence. Mr Modi and his acolytes should be under no illusion about the resolve of our nations and would do well to demonstrate the maturity, which political power demands, by negotiating an end to these tragic conflicts.