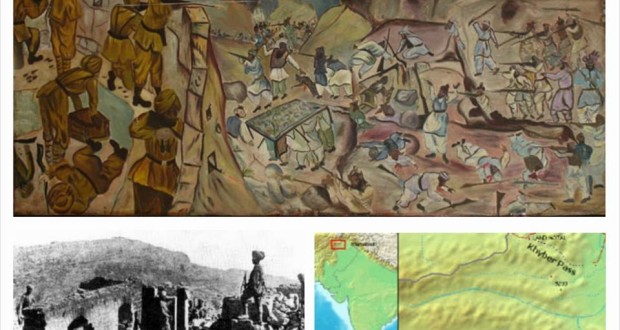 Comments Off on Sikh History: The 21 Sikhs of Saragarhi 658 Views

A small body of Sikhs defended a vital North-West Frontier post against 10,000 Afridi and Orakzai attackers. Tomorrow marks the 117th anniversary of their heroic effort.

Britain’s Parliament interrupted proceedings and rose to give a standing ovation on 12 September 1897 to 21 valorous soldiers — all of them Sikhs — for what was undoubtedly a tremendous act of collective bravery, and one of the greatest ‘last-stands’ in military history, the Battle of Saragarhi.

The North-West Frontier of undivided India, now a part of Pakistan known as Khyber-Pakhtunkhwa, is a harsh place. Embroiled even today in bloody conflict, it has been home to a multitude of battle-hardened tribes for centuries. In this tumultuous region, between the forts of Gulistan and Lockhart, which were built by one of India’s most proficient military commanders, Maharajah Ranjit Singh, is where Saragarhi is situated. As there was no visual contact between the two forts, Saragarhi was created as a heliographic communication post to signal between them.

Afridi and Orakzai tribesmen had started to revolt against British annexation of the area in the latter part of 1897, resulting in a multitude of attacks on both Gulistan and Lockhart, especially during the first week of September that year. Elements of the 36th Sikhs, under the command of Lieutenant Colonel John Haughton, had been moved to the area and had been successfully repelling attacks from the tough, hardy Pashtuns.

On 12 September, the frustrated tribesmen changed strategy; they decided to cut off this vital communication link that was being guarded by a detachment of the Sikhs, having only been reinforced in the previous couple of days by Havildar Ishar Singh, and just 20 other ranks. At 9 am, no less than 10,000 tribesmen assembled to launch an assault on Saragarhi.

Haughton, who was based at Fort Gulistan, received a signal that Saragarhi was about to come under attack from a mammoth force. His reply couldn’t have been anything but demotivating for the defenders; he was unable to send any immediate relief. The Sikhs, however, resilient and undeterred, knew quick, hard decisions were required. Ishar Singh and his men decided that they would fight to the last man. This was not just bravado. The tactic could, if successful, delay an attack on the forts, giving the troops there more time to prepare and for reinforcements to arrive. Fierce fighting ensued once the assault began and the Sikhs fought a series of delay tactics to ensure the fighting continued for as long as possible.

So much so, that as the battle was prolonged, and Afghan casualties mounted, commanders of the assault force tried offering the defenders favourable terms of surrender. That wasn’t an option for the Sikhs. Attack after attack was repulsed. Ishar Singh and his men continued to stubbornly hold out, while inflicting a steady toll on the enemy, despite an acute shortage of ammunition which eventually ran out. The tribesmen made more than one attempt to rush the gates of Saragarhi, but this too was unsuccessful. Finally, a breach was made in one of the walls by a small body of tribesmen which was not visible to the Sikhs, having stealthily crept up using a blind spot and laboured at the wall for a while. By this time the battle had raged on for the better part of the sunlight hours.

One can only imagine the fierce and brutal hand-to-hand combat that ensued between these ridiculously lopsided forces once the wall was breached. A determined Ishar Singh ordered his troops to fall back into an inner layer of Saragarhi, while he distracted and held the attackers at bay — another classic delaying tactic. After he fell, the enemy managed to finally breach the inner layers, and except for Sepoy Gurmukh Singh, who was regularly communicating details of the battle to Haughton, his commander in Fort Gulistan, every defender had been killed. The determined Gurmukh Singh asked his commander if he could now fix his bayonet, and an account describes him packing his equipment into a leather bag before doing so. The attackers decided to set fire to Saragarhi and according to Haughton’s account, engulfed in flames, Gurmukh Singh’s last words were the Sikh battle cry: “Jo Bole So Nihal, Sat Sri Akal (Victory belongs to those who recite the name of God with a true heart)”.

The courageous decision of Ishar Singh and his men had achieved the desired outcome. The battle had raged for over six hours and while there were a couple of patrols launched from Gulistan and Lockhart to distract the enemy, which reported there were around 14,000 attackers, the tribesmen had stayed focused on Saragarhi. The Sikhs, knowing very well what their fate would be, had held out against some of the most unfavourable odds for many hours, buying enough time for their comrades. Gulistan and Lockhart were saved from falling into Afghan hands and the lives of the vast majority of their regiment was saved too. For this extraordinary act of bravery and valour, all 21 Sikhs were awarded the Indian Order of Merit, which was the highest gallantry award given to Indians at the time. This remains the only instance when an entire body of troops has been given the highest award for the same battle.

When the relief party finally arrived at Saragarhi, there were over 600 dead Afghans and 21 soldiers of the 36th Sikhs along with one non-combatant — a camp follower and cook of the Sikhs who had been with them. Some of those enemy casualties are said to have been caused by artillery fire, after all the Sikhs had fallen; but in any event, for just 21 men to hold off the utterly overwhelming assault force of 10,000-14,000, this battle remains utterly remarkable and among the most heroic last-stands, ever — something akin to the Battle of Thermopylae fought between a Greek alliance and the Persian Empire in 480 BC.

The 36th Sikhs survive to this day. They were re-designated as the 4th Battalion of the Sikh Regiment — which is, unsurprisingly, the most highly decorated regiment of the Indian Army. Now 20 battalions strong, the entire regiment remembers the heroic and selfless sacrifice of these soldiers by commemorating Saragarhi Day as their Battle Honour Day each year.