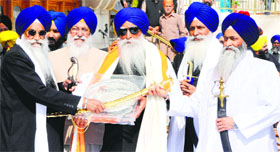 Comments Off on Sikh historian among three honoured 644 Views

Amritsar, Punjab: Akal Takht felicitated three Sikhs for their contribution to their respective fields at a programme in the Golden Temple Complex here today.

Akal Takht Jathedar Giani Gurbachan Singh presented them a silver plaque, a sword, a shawl and a siropa (robe of honour). The Akal Takht Jathedar said Bhai Gurmej Singh made untiring efforts to transliterate Guru Granth Sahib in Braille and spent his entire life in the propagation of Gurbani. “Kirpal Singh did a commendable work in the field of Sikh history and research while contributing to the propagation of Sikhism across the globe,” he said.