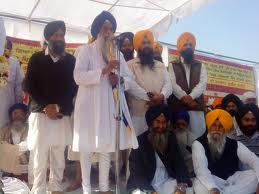 Amritsar, Punjab: The Sikh clergy has termed eight members of an educational trust associated with Gurdwara Budha Johad in Rajasthan as ‘tankhaiya’ (guilty of religious misconduct). Akal Takht Jathedar Giani Gurbachan Singh said the two factions of the committee were engaged in a tussle.

He said the eight persons had been summoned in the next meeting of the Sikh clergy.

If they still don’t appear before the Akal Takht, action will be taken as per the religious code of conduct. The Sikh high priests took strong exception to a management panel faction in a New Zealand gurdwara banning entry of the rival group inside the shrine. They directed the committee to lift the ban.

The clergy expressed concern over the instances in which Sikh girls based in foreign countries were being allured to marry and shift to Muslim countries. They have directed the Sikh Council UK to prepare a plan to deal with this issue and get it approved from the Akal Takht.

The clergy has failed to take any decision on the Takht Sri Patna Sahib controversy. They said they would first see the video footage of the clash. They objected to Takht Patna Sahib Jathedar Giani Iqbal Singh lodging a police complaint.