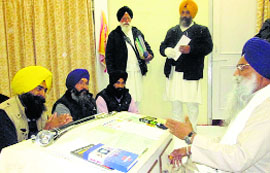 Amritsar, Punjab: A day before the Sikh clergy meeting, Sikh organisations supporting the original Nanakshahi calendar today said the Sikh high priests should not give in to the Sant Samaj’s demand of reverting to the Bikrami calendar and instead should work on building a consensus before taking a final decision on the matter. A couple of delegations also met the Akal Takht Jathedar here today.

Expressing concern over the possibility of further changes in the Nanakshahi calendar, the American Gurdwara Parbandhak Committee (AGPC) urged Akal Takht to take all the Sikh organisations, including the AGPC, into confidence before taking any decision.

Talking to The Tribune, AGPC coordinator Pritpal Singh alleged that efforts were on to completely do away with the Nanakshahi calendar “under the influence of the RSS”. They said such a move would not be acceptable to the Sikh Panth.

The US leaders said Akal Takht Jathedar Giani Gurbachan Singh must convene a meeting of the Panth and seek the opinion of all concerned before taking any decision. “We will not allow the SGPC to do away with the Nanakshahi calendar,” he said, adding that they had already adopted the original calendar.

Former Takht Sri Damdama Sahib Jathedar Giani Kewal Singh, who met Akal Takht Jathedar Giani Gurbachan Singh today, advocated the need to implement the original Nanakshahi calendar. Radical Sikh outfit Dal Khalsa also submitted a memorandum to the Jathedar in this regard. Party spokesperson Kanwar Pal Singh said the Nankshahi calendar was the manifestation of distinct identity of the Sikhs. He said Sikhs had been striving to get honourable recognition to their separate identity since long and reverting to the Bikrami calendar would be a setback for their just struggle.

He said no such decision was expected from Akal Takht that would create further divisions among the Sikhs. He castigated the Akali Dal and the SGPC for “killing the letter and spirit of the original Nanakshahi calendar through amendments”.

Noted Sikh scholar Ashok Singh Bagrian said the Nanakshahi calendar was the necessity arising out of independent Sikh identity and the need for fixed dates for Gurpurbs for the Sikh diaspora. He opined that the absence of any calendar of the Sikhs of their own would be counter to the Sikh demand of amending the Article 25 of the Constitution and would adversely affect the Sikh identity case pending before the Supreme Court.

Previous: CBI may have come under pressure to give Jagdish Tytler a clean chit, reveals ex-official.
Next: Explain UK’s role in Bluestar, say SAD, BJP