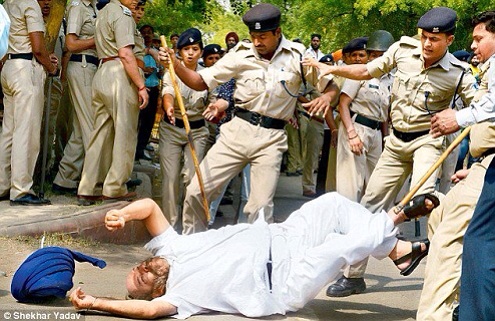 Delhi: All India Sikh Conference (AISC) held a demonstration against November 1984 anti Sikh Genocide outside police headquarters in Delhi on Thursday demanding to take stern action against those police officers who didn’t perform their duties during the 1984 anti Sikh Genocide and instead illegally disposed of thousand of bodies of Sikhs in an inhumane way. AISC burnt effigies of former chief justice of India, Ranganath Mishra and former police commissioner of Delhi Subhash Tandon.

AISC president Gurcharan Singh Babbar states that they had earlier released a list of police personals of all ranks posted in different police stations of Delhi during 1984 Sikh Genocide.

The AISC has also blamed those officials for their inaction and have demanded their arrest and investigation into their role.

AISC president informed that they had also submitted a memorandum to Delhi police commissioner BS Bassi stating that “It was the legal obligation of the Delhi Police to take these dead bodies in their custody, and they did fulfill it.

Gurcharan Singh further stated that the Central government had allegedly conspired against the Sikh in a planned manner and told the Sikh people again and again that investigating committees were doing their job well and they would definitely get justice.

The AISC has urged Bassi to take immediate legal action against all the then senior officers – ACP, DCP, Joint Commissioner and Commissioner of Police including the SHOs and other officers posted in all police stations of Delhi.

“Besides, we have also demanded that on the basis of the given facts, let a strict action be taken against the topmost police officers and political leaders who made the police force do this heinous crime” said Gurcharan Singh.