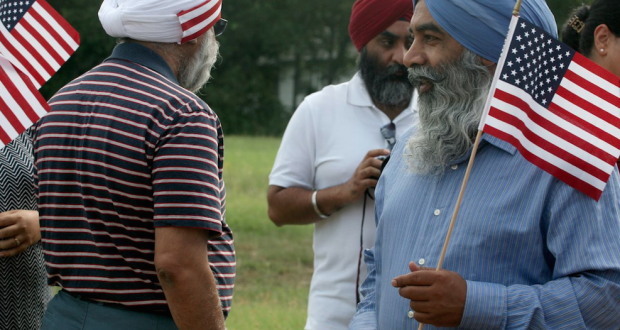 SAN ANTONIO — Amid the waving American flags and patriotic clothes and banners, a man walked along a Fourth of July parade route wearing an American flag turban and sporting a long beard, in tradition with the Sikh religion.

G.P. Singh, a former University of Texas at San Antonio engineering professor, walked with about 200 people along a half-mile parade route at the Hills and Dales community on the Northwest Side to celebrate July Fourth.

About 50 other followers of the Sikh religion were also in attendance to meet the community where the second Sikh temple in the city will be completed at the beginning of next year at 7914 Green Glen Drive.“This is one of the events that the community is doing and we’re part of the community,” he said, adding that members of the neighborhood association and throughout the area have been welcoming.

He says Sikhism is the fifth-largest religion in the world — Judaism is the sixth-largest — yet few people are familiar with it.

“We are the invisible faith,” he said.

Gurpaul Singh agreed that the residents in the area have welcomed the new place of worship.

“I think there are stereotypes, but … it’s events like this that truly break down stereotypes,” he said.

Jim Harmish, president of the Hills and Dales Neighborhood Association, has been active in the community for many years, serving as president of the association at least five times. He has met members of the 30 or so families who will primarily be using the new temple.

“We welcome them,” he said.

Jasmeet and Harliv Kaur say the temple is an open place for all, and they already have plans to have interfaith events to welcome people to the new temple when it is completed.

G.P. Singh was one of those who gave brief speeches at the pavilion. Among other things, he thanked the community for accepting followers of Sikhism and encouraged people to celebrate the holiday with as much festive spirit as his turban showed.