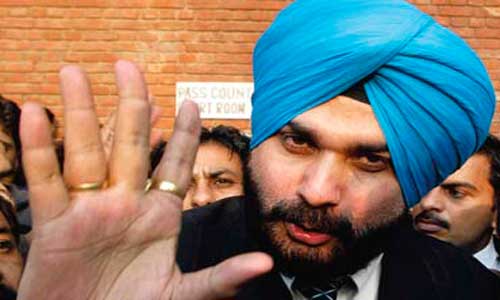 Amritsar, Punjab: Even as the demand that Akal Takht should initiate action against former Amritsar MP Navjot Singh Sidhu for alleged distortion of “gurbani” is gaining ground, most of the Sikh intellectuals say a “patit” (apostate) Sikh could not even be summoned by Akal Takht as it was against Sikh “rehat maryada” (code of conduct).

Former Akal Takht Jathedar Giani Joginder Singh Vedanti said any Sikh who either cuts or colours his hair could not be summoned to Akal Takht. He also felt that Akal Takht should not be dragged into a political battle like this.

SGPC executive member Karnail Singh Panjoli said Sidhu could not be summoned to Akal Takht. He said a committee comprising Sikh intellectuals should be set up to probe into charges against him and if proven guilty, legal action should be initiated against him under Section 295A of the IPC.

An SGPC official, pleading anonymity, said a “patit” Sikh cannot be summoned to Akal Takht as even “ardas” could not be offered at the Takht in his name. Former DSGMC president Harvinder Singh Sarna said summoning Sidhu to Akal Takht would erode the Panthic traditions.

He alleged the Akali Dal had already exploited Akal Takht to the hilt for furthering its interests and it was now planning to do the same to settle scores with Sidhu. He said if Akal Takht summoned Sidhu, it would be tantamount to giving recognition to “patits”.

However, former Akal Takht Jathedar Bhai Ranjit Singh said, “If someone believes in Guru Granth Sahib, sports turban and calls himself a Sikh, he can be summoned to Akal Takht.” As per Section III of the Sikh “rehat maryada”, “ardas” for and on behalf of any Sikh or non-Sikh, except a fallen (patit) or punished (tankhaiya) Sikh, can be offered at the Takhts. Similarly, Article XXV titled “Method for imposing chastisement” says, “Finally, an ‘ardas’ for correction (atonement) should be performed.”

In the light of these points, intellectuals say if such a person could not even offer “ardas” at the Takht how could he be summoned or punished by Akal Takht. Earlier, Sikh organisations like the All-India Sikh Students Federation and the Sikh Students Federation (Mehta) had met Akal Takht Jathedar Giani Gurbachan Singh and urged him to initiate action against Sidhu for distorting “gurbani” in his recent speech at Ludhiana. Some organisations had staged a protest against the former BJP MP in cities like Jalandhar and Ludhiana.