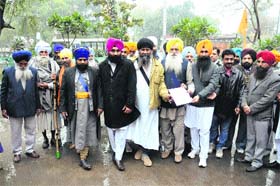 Bathinda, Punjab: The Sikh religious bodies today demanded release of Sikh prisoners in the state who have completed their sentence, but are still lodged in jails. Members of these bodies submitted a memorandum of demands to naib tehsildar Subhash Mittal.

On the 43rd day of the fast, the Jatehdar Akal Takht, Sant Samaj and Sangharsh Committee got Bhai Gurbaksh Singh’s fast discontinued on the promise that the four Sikh prisoners on parole will be freed and need not go back to the jail.

However, these prisoners were sent back to the jail on January 22 and other Sikh prisoners, too, have not been released.

The members demanded freedom for the prisoners till February 20 failing which an agitation will be held on February 21.