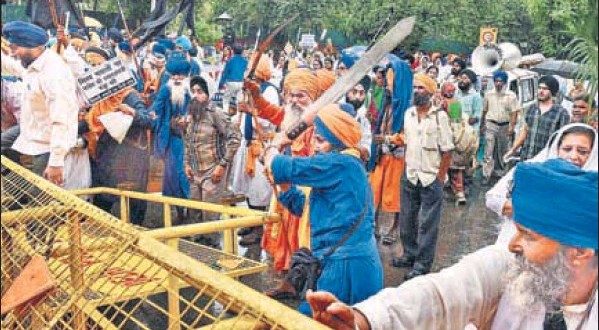 Amritsar, Punjab: A majority of the members and employees of the Shiromani Gurdwara Parbandhak Committee (SGPC) have moved from Amritsar to Haryana, fuelling fears of a possible showdown with the Sikh leadership of the neighbouring state over the contentious issue of a separate gurdwara committee.

The SGPC headquarters in the Golden Temple complex in Amritsar wore a near-deserted look here on Friday, with most of the officials and workers having left for Haryana on the orders of their superiors.

The SGPC has more than 4,000 employees in Amritsar. The figure for Punjab is around 16,000, while there are about 550 SGPC employees in Haryana.

A couple of senior SGPC officials, including secretary Dalmegh Singh and additional secretary Daljit Singh Bedi, did not attend office on Friday. When asked about their ‘bosses’, some sewadars said, “They have gone to Ambala or Kurukshetra.”

Several SGPC employees, when contacted on the phone, said they had been stationed in gurdwaras of Haryana following verbal orders. Sources said they were sent to SGPC-controlled shrines, including Gurdwara Nada Sahib near Chandigarh.

The trio was excommunicated for their efforts regarding the formation of the Haryana Sikh Gurdwara Management Committee (HSGMC).

Speculation is rife that in the SGPC that HSGPC (ad hoc) members, backed by the Haryana government, may try to take over some of the gurdwaras in the state after evicting the Amritsarbased body’s employees.

When contacted, SGPC president Avtar Singh Makkar denied that employees had been moved to Haryana for a possible showdown with HSGPC (ad hoc) members. “Some of them have been sent to Haryana gurdwaras for administrative purposes. They will be back soon after attending to their assigned duties,” Makkar added.

The Dal Khalsa observed that the Akalis led by chief minister Parkash Singh Badal were preparing the ground for a showdown with Sikhs of Haryana. Party head HS Dhami and senior leader Satnam Singh said there was a possibility of a clash between Akalis and Haryana Sikhs. In a statement, the two leaders blamed the Badals for the present scenario.

In an apparent bid to foil any attempt by the Haryana Sikh leadership to take over the control of gurdwaras, hundreds of SGPC supporters, including women, have been gathering at the historic gurdwara Chhevin Patshahi in Kurukshetra since Thursday evening.

Members of the SGPC security task force and the Shiromani Akali Dal (SAD) from Punjab and Haryana are also camping there to guard the shrine.