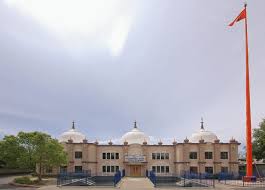 Shootout outside US gurdwara

Comments Off on Shootout outside US gurdwara 314 Views

Sacramento, California: At least one shot was fired during the annual Baisakhi Parade near a gurdwara at 176 E Pole Road in Lynden on Saturday.

The police arrested a Whatcom County man after a fight broke out and at least one shot was fired outside the gurdwara. Witnesses reported that several men started fighting in front of the Guru Nanak Gursikh Gurdwara. Balwinder Singh Nagra (41) from the Bellingham area allegedly grabbed a gun from his vehicle and shot at several men.

Nagra was arrested and lodged in Whatcom County Jail on the suspicion of drive by shooting and unlawful possession of a firearm. Under the state law, the term “drive-by shooting” includes shootings from the immediate area of a vehicle used to transport the suspect, the weapon or both. There were no known injuries, but the other men involved in the fight left the area.

A bullet went through both the passenger and driver’s side windows of a parked white Toyota Camry in a field, about 150 yards from the event, before striking another parked car. More than 1,000 visitors gathered at the gurdwara for the parade.