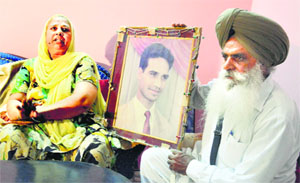 Chandigarh: The pre-mature release of life-convict Gurmeet Singh, alias Pinki, an alleged terrorist-turned-commando-turned cop, in the murder case of Avtar Singh, alias Gola, of Ludhiana has stirred a controversy with lawyers questioning the legality of the release and the procedure adopted to send certain prisoners to Nabha open jail, where they get faster remission in sentence. Even religious leaders, owning allegiance to the SAD, have questioned the release.

Pinki was released a few days ago after spending seven years in jail. Punjab Governor Shivraj Patil issued the orders after the state Cabinet recommended the case to him. Pinki had pleaded mercy on the basis of good conduct.

Akal Takht Jathedar Giani Gurbachan Singh has opposed the release saying same rules should be followed in all cases. “If the state government could remit the sentence of Pinki then why it could not make efforts for the release of various Sikh prisoners who have completed their jail term long ago.” SGPC president Avtar Singh Makkar has sought review of the decision, saying “The state government should review it. The move has hurt the members of Sikh community.”

Bhai Gurbaksh Singh Khalsa, who observed a 42-day fast seeking release of Sikh prisoners languishing in various jails last year, said it proved that the state government was all powerful when it came to benefiting its own persons.

“It was unfortunate that the government was remitting sentence of such convicts when scores of Sikhs were languishing in jails for decades”, he said.

Pinki was once an alleged member of the banned terrorist outfit Babbar Khalsa. He was credited with nabbing of high-profile terrorist Jagtar Singh Hawara in 1990s. But he was also involved in a series of controversies, including involvement in fake encounters and land disputes. He got out-of-turn promotions and was eventually involved in the murder of 21-year-old Avtar Singh in Maya Nagar, Ludhiana, on January 7, 2001. Pinki was an Inspector at that time.

The all Avtar did was to ask Pinki and his gunmen for a way on a street where they were drinking openly with liquor bottle and glasses atop a car. All these years his family faced threats and compromise offers.

Pinki has drawn the ire of Sikh organisations and the clergy for his alleged involvement in the killing and disappearance of ‘innocent’ Sikh youths. Rajinder Singh Bains, counsel for Avtar Singh’s family, said: “We will appeal against his release. The Supreme Court has clearly said that a criminal should not be released before 14 years when sentenced for life. There must be valid basis for granting mercy.”

“As per records, the convict displayed good conduct. He got benefit from periodical remission of sentences given by the government to several prisoners,” a jail department official said.

Pinki’s release has shattered Avtar’s parents Amrik Singh and Charanjit Kaur. Showing RTI documents, they claimed, “Pinki remained out of jail six times between December 2012 and June 2014. RTI information shows that his jail term of four years, four months and six days has been waived.” Amrik said they had to sell their valuables to arrange money for fighting the case.

Previous: Teaching turban tying keeps Sikh youth’s hopes afloat
Next: Afghan Sikhs: one of the most vulnerable minorities in the world