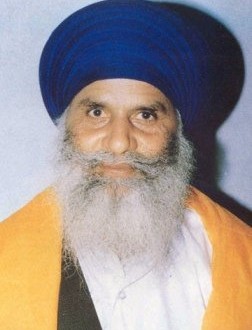 Damdami Taksal is the inheritor of True Khalsa spirit of Sewa-Simran-Sacrifice. It was a religious university run by Baba Deep Singh ji and Bhai Mani Singh ji, whose military wing was known as Shaheed Jatha and later as Misal Shaheedan. This was Taksal of Sant-Sipahis. After 1764, when Baba Gurbaksh Singh ji divided it in two parts, one Jatha was to preach Gurbaani and conduct Amrit Sanchar, while Military wing was to fight for Panth whenever need arose. From this Jatha of Sant-Sipahis came Generals, Sants and Sipahis such as Baba Taara Singh ji, Bhai Taru Singh ji, Nawab Kapoor Singh ji, Baba Naina Singh ji, Baba Phoola Singh ji , Giani Bhai Sant Singh ji and millions of others great souls.

Jathedar Baba Thaara Singh ji was born in 1924 in Aurangabad, Maharashtra. His earlier name was Dhian Singh. When Vadde Mahapurakh, Baba Gurbachan Singh ji did katha in Aurangabad, Dhian Singh was insired to take Amrit. After taking Amrit, his name was changed to Avtar Singh. Babaji got this name, Avtar Singh, inscribed on his left arm. Few weeks later, he joined Jatha and came to Punjab and started living in Taksal as Vidyarthi. Immersed in Naam-Sewa-Santhya, Babaji soon attained awastha of Gurmukh and became very close to Sant Baba Kartar Singh Ji Khalsa.

Sant Kartar Singh ji, 13th Jathedar of Taksal met an accident in 1977, and refused to get his hair cut for operation due to which he left his body. After him Sant Jarnail Singh ji was appointed Jathedar of Damdami Taksal by Baba Thakur Singh, Baba Thaara Singh ji and other Singhs of Taksal according to wish and Hukam of Sant Baba Kartar Singh Ji Khalsa. Santji had the mission of shaping Sikh panth’s destiny and reviving the Shaheedi spirit of Baba Deep Singh ji Shaheed in Panth.

It was at this time Santji left for Parchar in villages, cities of Punjab and rest of India. He appointed Jathedar Baba Thaara Singh ji for sewa of Gurudwara Gurdarshan Parkash(Headquarters of Taksal). He was incharge to look after Sewa, Santhya and other administrative duties at Taksal. Babaji along with Baba Thakur Singh ji was one of the senior most Singhs of Taksal who had come to Mehta chowk with Sant Kartar Singh ji. He did all the sewa with utmost devotion as Hukam of Guru Gobind Singh ji. Singhs of all Jathebandis had great respect for him due to his self-less sewa and high spiritual jeevan. He was also guide of warrior group of Taksal, which Sant Kartar Singh was creating under Sant Jarnail Singh ji, including Singhs like Baba Manochahal, Bhai Usmaan Singh ji, Bhai Dalbir Singh Abhyaasi and others. These very Singhs in future were to become great Shaheeds of Panth.

During Santji’s Bombay, Haryana and Delhi tour in 81-82, Babaji was doing Sewa at Mehta chowk. When Santji was arrested by Punjab police in 82, he appointed Baba Thaara Singh ji as incharge of Sewa at taksal. After he returned after 28 days, Santji started Sikhi Parchar with more determination and Bir-ras. Government was worried about Santji’s intentions, so it tried its best to stop Santji. But as it tried, Parchar grew stronger. There were attempts at Santji;s life, Pothis of Guru Granth Sahib ji, gutka Sahibs and other baani pothis were burnt by police in chando kala in Haryana, which deeply hurt Santji. He started giving a new shape to parchar, turning it into movement for Sikh rights and freedom.

It was at this time Government took the extreme step and one day arrested some Singhs of Taksal. During their hearing in court, Bhai Amrik Singh ji and Baba Thara Singh ji were sent by Santji to take care of Singhs and the case. As these Gurmukhs reached court complex, they too were arrested without any charges. When Santji heard about Bhai Sahib’s and babaji’s arrest, he was deeply pained. Santji was unwell that day and doctors had put him on glucose.Despite being unwell, Sant Jarnail Singh ji Khalsa reached with his Jatha at Akaal takhat Sahib on 18th July 1982 and did Ardas at feet of Guru Hargobind Sahib Ji. Santji declared Dharam yudh morcha that day whose aim was ‘’ not just to free Bhai Amrik Singh ji and Baba Thaara Singh ji but whole Sikh panth from shackles of Slavery’’! He did this Ardas also at Akaal Takhat sahib and vowed to continue the morcha till Khalsa Panth emerged victorious, till Fateh wasn’t achieved.

Morcha continued for many months and government, due to pressure of Panth dropped fake charges against Bhai Sahib and Babaji, and freed them from jail. But Santji was determined to take the morcha to its final mission, Freedom of Khalsa Panth. As the parchar grew and Sikh youth started taking amrit in thousands, there was a Sikh revival movement in Punjab under command of Sant Jarnail Singh ji Khalsa and Damdami Taksal. 33 Sikh Jathebandis supported Santji in this mission. As people said in 19th century, ‘’there is nothing as dangerous as a united Sikh nation’’! Indian government too feared the day Sikhs would smash its imperialist and fascist set-up in Punjab. Preparations to crush Sikh movement were started by Delhi and here in Amritsar, Santji too started preparing to defend the Dharam yudh morcha and Akaal takhat.

Defense positions were established in and outside Parkarma of Harimandir sahib. Important positions were set-up at Langar hall roof, Bunga Ramgarhia , Water tank, on Complex entrance from Langar, Dakhani Deorhi and Ghanta Ghar. These were to be the first resistance posts of Defenders. Baba Thaara Singh ji was given command of Langar Hall and Bunga Ramgarhia position. Bhai Amrik Singh Ji also stayed in this position till evening of 5th June. When the Indian Army attacked Darbar sahib complex on morning of 4th June 1984, around 50 Singhs defending these positions under Baba Thaara Singh ji gave a tough resistance and repulsed numerous attacks. Singhs held on to their defenses and forced invading army to retreat, until they brought in artillery guns and Tanks to destroy jhujharoo positions. It was on night of 4th june, that continuous bombing of jhujharoo positions by Guns and Tanks resulted in Shaheediya of many Singhs and all the morchas which were at an high altitude were destroyed. Baba Thaara Singh ji was on Langar roof with Singhs and had LMGs and other guns. But they were no match to artillery bombs and Tanks. This position too was demolished and many Singh attained Shaheedi. After the posts at Water Tank, Langar Roof and Bunga were demolished; Bhai Major Singh Nagoke and Bhai Dalbir Singh Abhyaasi went inside Bunga Ramgarhia and continued fighting till 9th of June.

Baba Thaara Singh ji, Bhai Bua Singh, Bhai Ajaib Singh Mahakaal and some other Jujaroos went inside Parkarma and took positions near Dukh Bhanjani Beri. Despite being wounded, Babaji continued to defend the eastern entrance of Darbar Sahib, from where Tanks were to be brought in. Whole night of 5th June, he held on to his position and kept fighting, with other great Singhs by his side. But Singhs had no reinforcements, no medical help, nothing to eat, no one to come to their rescue. It was a fight to finish. Babaji had a wireless conversation with Santji on 5th June Amrit vela and said his last Fateh to Santji and told Santji that He was going to attain Shaheedi. Santji’s eyes got wet with love and affection after hearing last words of Baba Thaara Singh ji, who along with Baba Thakur Singh ji had been a father-figure to Santji in Taksal. As Santji said his final Fateh to Buzurg Jathedar, who was 60 years old that time, Singhs gave out jaikaaras at Akaal takhat. Till now Indian army had launched a massive offensive to destroy the position of Baba Thaara Singh ji. As Singhs came under heavy gunfire, numerous bullets pierced Babaji’s chest, stomach and head. Baba Thaara Singh ji attained supreme Shaheedi at the feet of Guru Arjan Dev ji, near Dukh Bhanjani beri on Amrit Vela of 5th June. He was First Jathedar of Khalsa Fauj to attain Shaheedi in Operation Bluestar.

During his conversation with Santji on morning of 5th June, Babaji had said,’Santji, don’t forget you have done Ardas to free Khalsa Panth from Slavery. And being spiritual descendant of Baba Deep Singh ji, you have to fulfil this Ardas, for honour of Taksal and Panth’. Santji replied in positive and promised to Babaji that Morcha will continue till Fateh, no matter what happens.

And its our firm belief, with blood of Brahmgianis like Baba Thaara Singh ji and Bachans of Baba Thakur Singh ji, Khalsa Panth will definitely win this War of Freedom one day.