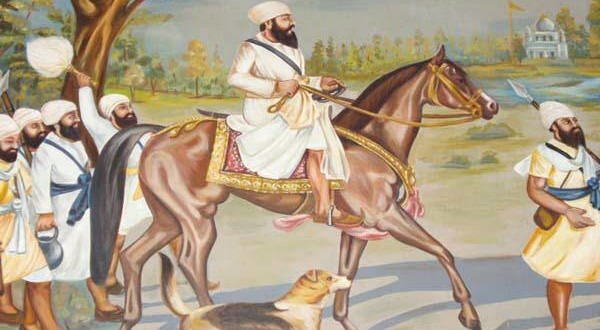 Baba Bir Singh Ji (1768-1844) was a Sikh saint, holy man and great warrior who practiced Gurmat in its purity. Being disgusted at the events that followed the death of Maharaja Ranjit Singh, the Sikhs talked of making Baba Bir Singh jee their ruler King or Prime Minister. After Maharaja Ranjit Singh’s death the anti-Panthic Dogra clan took control of the Sikh Kingdom and led an attack on Baba Bir Singh Ji’s dera which led to Baba Ji’s heroic shaheed which will be remembered throughout Sikh history.

Baba Bir Singh Ji was born in July 1768 at the village of Gaggobua in Amritsar district. After his father, Bhai Seva Singh Ji, became martyred in a military campaign in Multan, he joined the Sikh army. He took part in Maharaja Ranjit Singh’s campaigns for the capture of Kashmir and Peshawar. After several years of active service, he secured his dismissal and began preaching Gurmat. He set up his dera in the village of Naurangabad in Amritsar district, near Tarn Taran, which became very popular. It is said that about 4,500 visitors were fed langar every day. As a result of Baba Ji’s influence on the people, he had a volunteer army of 1,200 musket men and 3,000 horse men. Baba Ji supported Maharaja Ranjit Singh’s rule and after the death of the Maharaja in 1839, he was deeply saddened to see the courtiers fight amongst themselves fuelled by jealousy, envy and anti-Sikh interests.

During this critical period, Sikh soldiers and ordinary Sangat began to turn to Baba Ji for guidance. On 2nd May 1844, Attar Singh Sandhawalia, who had been in residence in British India for some time, crossed the Sutlej river into the Sikh territory and joined Baba Bir Singh Ji who was then camping near Harike Pattan. The two surviving sons of Maharaja Ranjit Singh, Prince Kashmira Singh and Prince Pashaura Singh, and many Sikh chiefs, including Jawahar Singh Nalwa, son of the famous Sikh General Hari Singh Nalwa, and Diwan Baisakha Singh, had already taken refuge at Baba Ji’s dera. Baba Ji’s camp had become the centre of the Sikh revolt against the Dogra dominance over the Panjab.

Hira Singh Dogra, the then ruler of the Sikh kingdom based in Lahore, sent a strong force comprising 20,000 men and 50 guns to attack Baba Ji’s dera and capture the two surviving sons of Maharaja Ranjit Singh, fearing that he will lose rule to the Sikhs. At first the Sikh army of Lahore refused to attack the camp of a holy saint, however with the lies that Attar Singh joining Baba Bir Singh was a sign that they supported the British and planned to attack the Sikh kingdom influenced the Sikh army to follow the orders of the attack. The Sikh army besieged the camp on 7th May 1844.

Baba Ji instructed the Sikhs to cook langar. Daal, Parshaadey, Kheer and Degh were prepared as if they were cooking for thousands of people. Baba Ji instructed that food should be placed in all the rooms of the fortress and that a full bowl of Degh should be in Guru Sahib’s presence ready for the arrival of the guests. Baba Ji got the Sikhs to sing Gurbani. When the attack began on the fort, the Sikhs in the fort asked Baba jee for permission to fire back. Baba Ji replied, “No! They are our brothers, not enemies. They are in the image (roop) of the Guru” The Sikhs inside the fort said, “But they are attacking us.” “They don’t realise that we are their brothers. However, we know they are. We cannot disrespect the Guru’s roop. This knowledge makes all the difference.” The difference was death. Those who value the Guru’s ideal of brotherhood, prefer death.

Baba Ji sat in the presence of Sri Guru Granth Sahib Ji Maharaj and absorbed himself in meditation. The Lahore Darbar’s forces were shocked that there was no retaliation from the Sikhs inside the fort. They stormed inside the fort without a fight and slaughtered the Sikh Sangat and Baba Bir Singh Ji’s men. Baba Ji’s right knee was shattered by a tank shell and his body was pierced with countless bullets and thousands of Sikhs were killed. Maharaja Ranjit Singh’s two surving sons died in the onslaught and in the panic, hundreds of Baba Ji’s followers were drowned in the river while trying to cross it.

General Court’s battalion, which had played a leading part in the action, was boycotted when it reached the headquarters and was always referred to as Guru-maar (killer of the Guru or holy man). The attacking troops never forgave Hira Singh Dogra for forcing them into an action which led to the death of a holy saint, despite his attempts to promise to build a memorial where Baba Bir Singh Ji had been cremated and provide money for its maintenance. He had to pay for this onslaught on Naurangabad with his own life. The killing of Baba Bir Singh Ji and a subsequent attempt by Hira Singh Dogra’s favourite, Pandit Jalla, to poison Maharani Jind Kaur aroused strong feelings amongst the Sikh army. Fearing his death, Hira Singh Dogra abandoned Lahore, leaving with 4,000 of his trusted troops and several cartloads of gold, silver and jewels removed from the treasury, but a Sikh force led by Jawahar Singh and Sham Singh Attariwala overtook him on the way, killing him along with his adviser, Pandit Jalla on 21st December 1844.