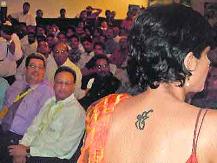 Comments Off on SGPC warns actor over Gurbani tattoo 1,082 Views

Amritsar, Punjab: The SGPC has taken serious note of Punjabi actor Sippi Singh allegedly getting a tattoo on Gurbani on his shoulder. In a press note issued here today, SGPC spokesperson Diljeet Singh Bedi said earlier too there were instances involving movie stars where Akal Takht had warned them against such sacrilege.

He said Sippi’s move had hurt the religious sentiments of the Sikhs. He cautioned him to get the tattoo removed and apologise to the Sikh community.

In another instance, Akal Takht has warned an England-based gurdwara against going ahead with a programme scheduled from July 24 to August 1, contending that only programmes related to Gurbani could be organised inside a gurdwara premises. The Akal Takht Jathedar has directed the gurdwara committee chief to cancel the programme.