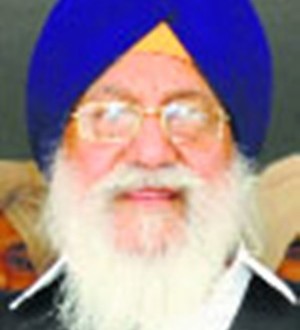 Chandigarh: Dubbing the Haryana Government’s initiative to carve out a separate Sikh gurdwara panel for the state as ‘unconstitutional and illegal’, an anguished Shiromani Gurdwara Parbandhak Committee (SGPC) has urged the Central Government and the President to intervene and stall the move.

The Amritsar-based apex religious body of the Sikhs on Friday said it might take a legal route to block the creation of the Haryana Sikh Gurdwara Parbandhak Committee (HSGPC). “The party will decide the next course of action and do the needful. We will see…we might take legal action if necessary,” said SGPC chief Avtar Singh Makkar. The SGPC chief, who presided over a meeting at Nada Sahib, said: “It’s the prerogative of SAD patron Parkash Singh Badal and party chief Sukhbir Singh Badal to take up the matter with the Central Government and the President. We have also requested the Haryana Governor to not give his nod to the Bill for creation of the HSGPC.”

It is learnt that Badal during his recent meetings with top BJP leaders sought the Union Government’s support to stall the ongoing process for creation of a separate HSGPC.

On being asked about the Modi government’s response, Makkar said: “It (response) was good.” The sources, however, said SAD leadership was given a ‘cold shoulder’ by central BJP leaders over the issue. Consequently, the SGPC has ‘toned down’ its stand on the HSGPC issue. The panel on Friday renewed its ‘truce’ offer to Haryana Sikh leaders. “We are all for the ‘panthic ekta’. To achieve it, we again offer our Haryana elected members two posts — that of Vice-President and Additional Secretary. We are also okay with Haryana gurdwaras spending the income being generated by them,” said Makkar.

“We will react when the time comes. Hooda’s plan is to garner Sikh votes in the upcoming Assembly, but no one will listen to him. Chatha has been speaking lies as he had earlier claimed that the income from Haryana gurdwaras was more than Rs 500 crores, whereas, in reality, it was just Rs 30 crore,” said Makkar.

When asked why Haryana Sikhs could not have a separate gurdwara management committee when such bodies were there in Delhi and Patna, Makkar said: “Those are local management committees and not parallel to the SGPC. They are basically managing one or two shrines.”

Makkar also claimed that it was wrong to say that Haryana Sikhs want a separate body. “The so-called signatures of over 2.5 lakh Haryana Sikhs are bogus. No Sikh is in the favour of HSGPC,” he claimed.

Legal option open, says Makkar:
The Amritsar-based apex religious body of the Sikhs on Friday said it might take a legal route to block the creation of the Haryana Sikh Gurdwara Parbandhak Committee (HSGPC). “We will see…we might take legal action if necessary,” said SGPC chief Avtar Singh Makkar.