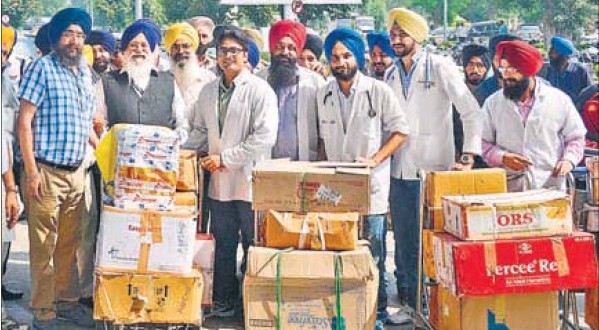 Amritsar, Punjab: The Shiromani Gurdwara Parbandhak Committee (SGPC) continued with its humanitarian task of providing relief and assistance to flood-ravaged people of Jammu and Kashmir (J&K), with its president Avtar Singh Makkar declaring that the gurdwara body would continue with its ‘sewa’ as long as it was required by the people of the Valley.

Makkar made this declaration after sending a relief consignment and a five-member medical team to Srinagar from Sri Guru Ram Dass Jee International Airport here on Tuesday.

The medical team will stationed at Gurdwara Shaheed Bunga Sahib in Badgam, where a large number of flood-affected families have taken shelter.

The medical team has also taken with them a large quantity of medicines to be distributed free among flood victims.

“Based on requirements, medicines will be dispatched again. The medical team will make an assessment of medicines required and send a list to the SGPC headquarters,” he said, adding if the need arose more doctors could be sent to Srinagar.

Makkar appealed to the people of Punjab and those from other states to donate liberally for flood-hit people of J&K. He said warm clothes and blankets were urgently required and the SGPC had already sent a consignment containing these items. He said anyone wishing to make a donation could do so at any of the SGPC-run shrines and a receipt would be given for the donations made.

29 AIRLIFTED
The SGPC continued to pull out people from Srinagar on its own expense, with another 29 people were being airlifted by a Spice Jet plane from Srinagar to Amritsar on Tuesday.

Thus far, the SGPC has airlifted 226 people from Srinagar and the total number of people airlifted from Srinagar so far reaches 2,578 —majority of them being airlifted by the Indian Air Force (IAF).

RELIEF CAMP OPENED
Makkar said the SGPC had opened a full-fledged relief camp at Gurdwara Shaheed Ganj at Badgam near Srinagar and other than providing shelter, langar was also being served there.

He said special attention was being paid to children and infants at the camp.

Fresh and powdered milk had been stocked at the camp for distribution. Besides a large quantity of baby feeder bottles and feeder nipples had already been sent to Srinagar.