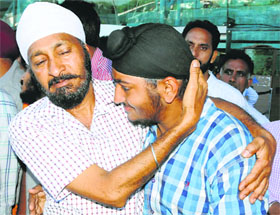 Amritsar, Punjab: On the request of the Army, the SGPC today sent 25,000 food packets for those hit by floods in Jammu and Kashmir. It also helped bring back 130 persons stranded in the state. They were received by SGPC officials at Sri Guru Ram Das Ji International Airport here this evening.

Raman Banotra of Amritsar, who returned with his wife Anita and child, said: “We saw a group of people looting an apple orchard. The Army is running a chopper service but it is proving inadequate in view of the large number of affected people.”

Banotra said the state government and its agencies had vanished and it was the locals who were helping those stranded. Dr Javed from Srinagar claimed the defence forces alone were rescuing the people. A group of construction labourers hailing from Azamgarh in Uttar Pradesh were among those who landed here. Vinod, who has been working in the Kashmir Valley for the past 14 years, said the floods had caught them unawares. Maninder Singh said he and his friends had gone to the Valley for sightseeing and were stuck in the floods. Aman Singh Bhatia said scores of buildings in the Valley were submerged.

“It was a nightmare. With no cooked food available, we had to depend on packaged eatables like biscuits in order to survive,” he said. Amandeep Singh, who belongs to Jalandhar, said that facing hunger, local people had turned hostile.

Akal Takht chief Jathedar Giani Gurbachan Singh has appealed to the Sikhs to come forward to help the flood-hit in Jammu and Kashmir. He said the help could be in cash or kind.