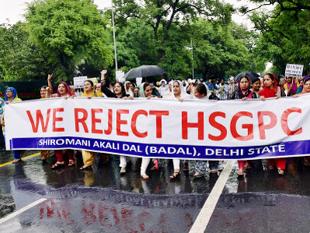 Chandigarh: Ruling Shiromani Akali Dal would convene a congregation of Sikhs on July 27 in the Golden temple premises to chalk out a strategy to counter Haryana government’s decision to form a separate Gurudwara management committee.

“The congregation will decide upon steps to fight the assault on Sikh religion, religious institutions and the Sikh Gurdwara Act by Bhupinder Singh Hooda-led Haryana government,” a party statement said.

Chief Minister Parkash Singh Badal was among the key functionaries of SAD who attended the five hour-long meeting, the statement said.

The party’s Core Committee also expressed satisfaction over the action taken by the Centre so far over the issue.

The Centre, through a communication to Haryana Chief Secretary SC Chaudhary yesterday, had asked the government to impress upon the state Governor to withdraw his assent to ‘Haryana Sikh Gurudwara (Management) Bill passed by the state assembly last Friday.

The Core Committee asked the Union Government to follow up its action of declaring the Haryana Act “unconstitutional” with appropriate steps to make it null and void as it was a breach of the Constitution of India, the statement said.

It cautioned Congress government in Haryana against “interference in Sikh religious affairs” and its attempts to “sow divisions” in the community.

It also opined that, constitutionally, the issue did not lie within the state government’s jurisdiction.

Meanwhile, a meeting of SAD office bearers, SGPC members and other representatives has been summoned here on July 22.