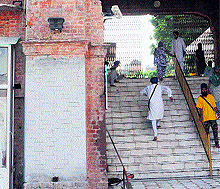 Amritsar, Punjab: The SGPC has removed a plaque put up at the historic Maharaja Sher Singh Gate adjacent to Akal Takht in the Golden Temple complex after a plea was filed with the Sikh Gurdwara Judicial Commission, stating that the plaque carries wrong information about the descendants of Maharaja Sher Singh.

When The Tribune team visited the Golden Temple complex, it found that the plaque was removed from the gate and the place where it was installed is now plastered with cement. The Maharaja Sher Singh Gate also holds great significance due to the fact that the SGPC has preserved it as a memory of the Operation Bluestar. The gate bears a number of bullet marks of the Army operation carried out in 1984. The SGPC took off the plaque after Vigyan Singh, a resident of Sarhali, filed a petition with the Sikh Gurdwara Judicial Commission, alleging that the management of the shrine has resorted to negligence and has given wrong information about the descendants of Maharaja Sher Singh, which is tantamount to distorting history.

He also stated that this was leading to dissemination of wrong information among scores of pilgrims visiting the holy shrine daily. He said the SGPC, which is the mini-parliament of Sikhs, should have verified facts pertaining to Sikh history before putting them up for public display. When contacted, Sikh Gurdwara Judicial Commission Chairman MS Brar confirmed that the petition was filed with them. However, he said, it was later withdrawn as the “two sides reached an agreement”. On the other hand, Darbar Sahib manager Partap Singh admitted that they have removed the plaque after a mistake in it came to the fore, adding that it would be put up again after making the correction. He said he had no idea as to when this plaque was installed.