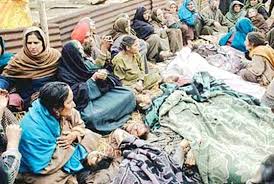 Amritsar, Punjab: The SGPC executive committee has decided to extend a financial aid of Rs 2 crore to the Sikh families affected by floods in Jammu and Kashmir.

The decision was taken at the SGPC executive meeting in Fatehgarh Sahib today. As per a release issued here, the amount to be provided to these families was decided on the basis of recommendations made by the sub-committee constituted to take stock of loss of life and property in the flood-hit state.

The beneficiaries have been divided into three categories. Those in the first category will receive Rs 1 lakh, second category Rs 50,000 and third category Rs 25,000, depending upon the extent of damage caused to their houses during the floods.

Similarly, the SGPC will give Rs 50,000 each to the next of kin of those killed during the floods. The same amount will be given to the families of those killed when a bus was drowned during the floods in Poonch-Rajouri. The SGPC has already announced an aid of Rs 5,000 per month to the students from J&K. The SGPC also gave its nod for the purchase of 30 buses for the SGPC-run institutions.

Previous: HSGMC row: SGPC to take up matter with new Haryana govt
Next: Gurdwara in Belgium asked to close down