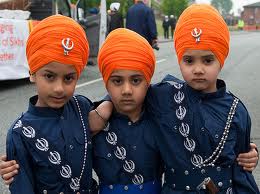 ‘SGPC must teach tying of turban to Sikh children’

Muktsar, Punjab: Punjab chief minister Parkash Singh Badal has advised the Shiromani Gurdwara Parbhandak Committee (SGPC) to launch a campaign to motivate rural children to tie a turban. Badal participated in a function at Mata Jaswant Kaur School in Badal village, Muktsar, on Monday, in which 200 schoolchildren tied the turban for the first time in their lives. “It is important for Sikh children to study Sikhism, along with academics. The SGPC must start a campaign.”

“Such initiatives are a must for this generation to connect with Sikhism. The turban is symbol of responsibility.”

Previous: All set for Maghi Mela
Next: Muktas memorial a picture of neglect