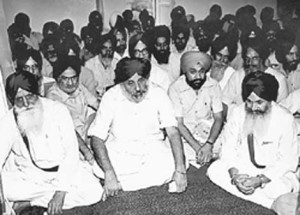 Amritsar, Punjab: Shiromani Gurdwara Parbandak Committee (SGPC) is the caretaker of all historical Sikh Gurudwaras in India except Delhi. Delhi Gurudwaras are being managed by Delhi Gurdwara Management Committee (DGMC). Both property management entities are being 100% funded by donations from the Sikh Community. Millions of dollars are being pumped into these organizations everyday and at the end of the day they are directly controlled by political parties of India. Majority of the time DGMC is in favor of Congress Party and SGPC is always in favor of Shiromani Akali Dal.

Attack on Sri Harmander Sahib by Indira Gandhi led government was carried out 30 years ago. It is now revealed that Akali Dal and SGPC were kept in confidence and were 100% involved in meetings with Indira Gandhi’s office a few weeks before the attack on Sri Harimander Sahib. Akali Dal under Longowal, Badal and SGPC under Tohra chief never liked the idea of the popularity of Saint and Soldier Sant Jarnail Singh Bhinderanwale in the hearts of Sikh community. People started listening to Sant Jarnail Singh ji because of his effective and religious leadership. Sant Jarnail Singh ji’s presence at Sri Harmander Sahib was an eyesore for SGPC. They were under the pressure from Government agencies to take action against activists of Bhinderanwale. After murder of Bhai Sodhi, Sant Jarnail Singh ji Bhinderanwale came to know had enough of the true face and goals of SGPC. Seeing that, SGPC and Alkali Dal quickly gave permission and helped Indira Gandhi to attack Sri Harmander Sahib. In Onkar Singh Goraya book, Operation Bluestar and After – An eyewitness account, Brig (retd) Goraya, then a colonel with the 15 Infantry Division based in Amritsar that was involved in Operation Blue Star, telling insights into the meek conduct of Akali leaders trapped inside as he was put directly in-charge of pulling them safely out of the temple complex. He was given the room number from central govt where SGPC and Akali leaders were hiding.

On the morning of June 6, 1984 Col Goraya was tasked to bring out the top Akali leaders trapped inside the complex and whose lives were in danger from the activists. When he reached the Guru Ram Das Sarai, inside the complex he found the dead and dying in different rooms. Some injured pilgrims begging for water and army men oblivious to the cries, as they concentrated on clearing the rooms of activists. Col Goraya found them in room no 8 and when he told Sant Harcharan Singh Longowal, Gurcharan Singh Tohra, Balwant Singh Ramoowalia and others that he had come to escort them to safety, “I heard a collective sigh of relief. They all got up instantly to follow me and there was no denial or hesitation.” Very different from an ‘eyewitness’ account given out by the Shiromani gurudwara Prabandhak Committee (SGPC) later on, according to which the leaders Sant Longowal apparently asked an army major to shoot them, saying that they had no wish to live when the ‘the army’ had killed so many pilgrims, staff and volunteers.

For the first time in 400 years the recital of gurbani was about to stop in the Golden Temple. As dusk fell on June 5, commandos dressed in jet-black dungarees slipped into the temple complex through the road between the serias and the Guru Ramdass langar building. They were able to bring back safely Akali Dal leaders like Harchand Singh Longowal and Gurcharan Singh Tohra along with their key aides living in the Teja Singh Samundari Hall, Guru Ramdass Serai and Guru Nanak Niwas.

As men of the 10 Guards under Lt-Colonel Mohammed Israr, regarded as some of the finest troops in the world and trained specifically for the assault role, prepared for the H-hour, hasty consultations got underway in the serais where moderate Akali leaders like Longowal, Tohra and the Dal’s official spokesman Balwant Singh Ramoowalia were hiding.

Read more at: http://indiatoday.intoday.in/story/punjab-terrorism-operation-bluestar-army-operation-at-golden-temple/1/360785.html Read more at: http://indiatoday.intoday.in/story/punjab-terrorism-operation-bluestar-army-operation-at-golden-temple/1/360785.html After 1984 attack, SGPC took over Harmander Sahib complex and started re-building Sri Akal Takht Sahib with the financial help provided by Indira Gandhi via Nihang Santa Singh. Seeing this, Taksali Singhs and other jathabandis took over Sri Akal Takht Sahib without any fight in 1986. SGPC workers and officers simply left their desks and offices during the Sarbat Khalsa gathering of 1986. Under false leadership of various jathabandis, sikh youth started getting eliminated by fake encounters and general public trust on jathabandis drastically fell in the negative levels.

Only less than a dozen out of 170 SGPC members passed 10th grade. Majority of the SGPC members are involved in drinking and consuming narcotic products. Immediate family members of elected SGPC members are patits (shorn hair). Few of the SGPC members are even involved in drug trafficking and work directly with Punjab political party “Akali Dal (Badal)”. Annual budget of close to 1000 crores is usually passed behind the closed doors and that only take few hours. There is no outside audit financial accounting firm nor any ethics department to make sure everything is going according to law and Sikh code of conduct.