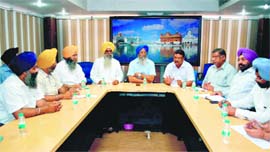 Comments Off on SGPC holds meeting with MC officials 567 Views

Amritsar, Punjab: With the objective of carrying out a beautification drive in the areas around the Golden Temple complex and arrange a hassle-free path for the pilgrims going to the holiest Sikh shrine, SGPC members today conducted special meeting with MC officials.

They also conducted a survey of the area and after gauging the bottlenecks, the secretary of the SGPC, Dalmegh Singh, said the MC had been conveyed to level the potholes, especially on the Ram Talai elevated road stretch leading to Ghee Mandi.

Similarly, several shopkeepers have extended their shops in an illegal manner, encroaching upon the pedestrian paths. MC officials have been told to initiate prompt action in that regard.

Traders and transporters do not refrain from parking their vehicles by the roadside, narrowing down the already congested lanes.

As the British era sewerage system has gone obsolete, it is observed that the water channels often remain blocked. “MC officials have been asked to clean up the chocked drains. During rainy season, the areas from the Langar Hall to Phatak Wali Gali, Atta Mandi deori and the passage towards Akal Takht, are inundated due to faulty sewerage system. We have asked MC officials to clean the water drainage system at these points,” said Dalmegh Singh.

With a view to discourage the taxi, auto-rickshaw and cycle-rickshaw operators from pestering the pilgrims, the MC has also been told to put boards by the roadside telling the distance of Golden Temple from different locations.

Also, to make the surroundings environment-friendly, the SGPC has proposed the MC to plant saplings. The MC has also been told to devise a plan to dispose of the garbage generated by the traders established around the Golden Temple complex.

MC Commissioner Pardeep Sabharwal, who attended the meeting along with other officials, said it was his moral duty to revamp the area around the Golden Temple and every effort would be made to remove the shortcomings.

“We would be conducting a rigorous drive to beautify the area around Golden Temple. Our teams will approach the traders and ask them to remove the encroachments on the public passages and dispose of their garbage at the designated places. Our concerned staff will lift the garbage from the trolleys during the wee hours so that the pilgrims should get a clean passage. About the illegal parking of vehicles, I will be co-ordinating with the police commissioner and request him to depute special recovery vans in the areas around the Golden Temple,” he said.