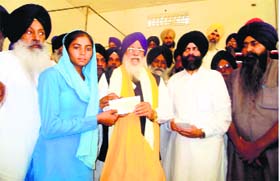 Comments Off on SGPC gives aid to displaced farmers 661 Views

Amritsar, Punjab: The SGPC seems to have sarted a drive against the Haryana Government’s move to set up a separate gurdwara panel. The SGPC president, Avtar Singh Makkar, has held several public meetings in Haryana over the past few days.

Makkar, who visited Kaithal and Karnal districts last week, will be headed for Ambala tomorrow. He plans to hold a meeting of the SGPC executive committee at Kurukshetra.

Talking to The Tribune, Makkar said the Haryana Government, that was holding a Sikh convention in Kaithal on July 6, had displaced 160 Sikh farmers in Kaithal and the SGPC was trying to rehabilitate them.

He said the SGPC had provided ration, water tanks and generator sets to the displaced families. Also, cheques worth Rs 21 lakh had been distributed among 116 families. He said the SGPC would support these farmers till the time they got justice.

Makkar said seven big gurdwaras and 18 small gurdwaras in Haryana were being managed by the local committees and 65 per cent of the income generated by these gurdwaras was spent on their maintenance. The SGPC received only a small portion of the gurdwara funds.

He said the SGPC was trying to open schools in Haryana. It had set up a medical college at Shahbad Markanda, but the Haryana Government had refused to give NOC (no-objection certificate). He accused the Haryana Congress of resorting to votebank politics by raking up the issue of a separate gurdwara panel ahead of the Assembly elections in the state.