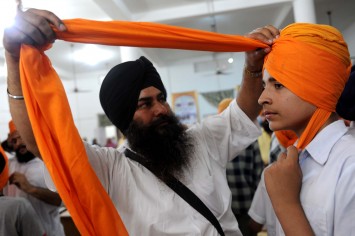 SGPC for creating awareness about Sikh symbols in US

Amritsar, Punjab: The Shiromani Gurdwara Parbandhak Committee (SGPC) has appealed to Sikh religious leaders and groups based in the US, Canada, Britain and other countries to join hands and launch campaigns in their respective countries about Sikh history and religion, with special emphasis on their religious symbols, like turban. In a release issued here on Friday, SGPC additional secretary Daljeet Singh Bedi made a mention of the awareness drive launched in the US through the cable network by Waris Ahluwalia, a US citizen. In this drive emphasis is being laid on the Sikh religious symbols, like the turban, that give the community members a distinct identity, he added.

“Sikh religious leaders and prominent members of the community should also launch awareness campaigns like the one launched by Ahluwalia. This will help in a better understanding of the Sikh community and may go a long way in curbing incidents of hate crime against the community”, added Bedi. The SGPC official pointed out that Sikhs have often been subjected to racial discrimination and have also been physically assaulted in the US and other nations. Such incidents have increased after the 9/11 terror strikes in the US, as due to lack of awareness, Sikhs supporting turbans have been often mistaken as being supporters of a particular terror group, he added.

Bedi also referred to the harassment that Sikhs have faced at work places and at airports on account of their head gear. They have been forced to remove their turbans for security checks and humiliated, he added. “All this has happened as we have failed to create an awareness about our history and religion”, he added. Bedi pointed out that the shooting incident in 2012 at a gurdwara in Wisconsin in the US wherein six persons were killed had sent shock waves in the community. “We must move fast and launch awareness drives about our religion, so that such incidents do not occur again”, he added.