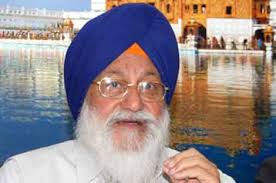 Amritsar, Punjab: The Shiromani Gurdwara Parbandhak Committee (SGPC) is all set to add another chapter to its history, as the foundation stone of its proposed ‘International Sikh Centre’ will be laid on October 31 at Yuba City in the state of California in the United States.

A 5-member delegation, led by SGPC chief Avtar Singh Makkar left for the US from Delhi on Monday for this. Others in the delegation are SGPC senior vice president Raghujit Singh Virk, general secretary Sukhdev Singh Bhaur, executive member Rajinder Singh Mehta and Paramjit Singh Saroya, additional secretary in the gurdwara body.

In a press release issued here, SGPC secretary Roop Singh said that Makkar would lay the foundation stone of the centre in accordance with Sikh rituals.

The opening of the centre for the spread of Sikhism became possible after the US Administration officially registered the SGPC as an incorporated organisation in October last year. It was registered as ‘SGPC USA Inc’ and was, thereafter, allowed to open its bank account in the Bank of America branch in Yuba City.