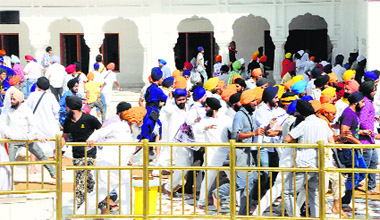 Amritsar, Punjab: Even as various Sikh organisations expressed shock over the violent clash between members of the SGPC task force and activists of radical Sikh outfits at the Golden Temple complex here today, the SGPC and Akal Takht have taken contradictory stand on the issue.

While Akal Takht Jathedar has virtually given a clean chit to SAD (Amritsar) president Simranjit Singh Mann, the SGPC has blamed him for the trouble. Talking to mediapersons, the Akal Takht Jathedar, Giani Gurbachan Singh, blamed some “unscrupulous elements” for the violence. He alleged that their aim was to create fissures in the Sikh community.

He said the clash broke out after Mann had left the venue. He said the culprits would be identified with the help of CCTV cameras and stringent action would be taken against them. He denied that “historic” weapons were used in the clash.

However, SGPC president Avtar Singh Makkar blamed Mann and Amrik Singh Ajnala for the clash. In a statement, he said six SGPC employees, including Bhai Satnam Singh, one of the Panj Piare, were injured. He said those who had indulged in the violence had “humiliated Operation Bluestar martyrs”. He accused them of violating the Sikh “maryada”.

Mann said a section of Sikhs raised pro-Khalistan slogans and the Akal Takht Jathedar asked him to stop them. “When I asked for the microphone, I was snubbed. I climbed down the stairs to address the gathering. This angered the sangat that confronted the SGPC task force and a clash ensued,” he said.

Chandigarh: The Shiromani Akali Dal (SAD) has condemned the violence “unleashed by the SAD (Amritsar) in the Darbar Sahib complex” and said such conduct amounted to “disrespecting the sacrifices of the martyrs.”

Party general secretary Maheshinder Singh Grewal said the manner in which SAD (Amritsar) had tried to use a religious function to revive itself politically was condemnable. Terming the “sacrilegious conduct” as anti-Sikh act, the SAD appealed to the community worldwide to maintain calm. “The SAD will not allow anyone to play politics over the bodies of the martyrs of Operation Bluestar,” Grewal added.

Previous: Violent clash at Akal Takht, 12 hurt
Next: Need to save youth from drugs, says Jathedar