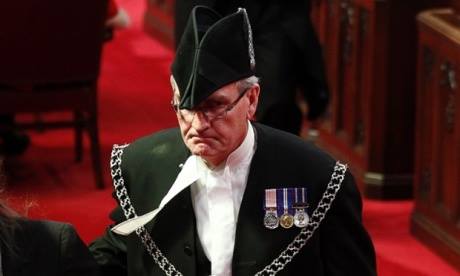 Comments Off on Sergeant-at-arms hailed as Canadian hero for shooting dead terrorist. 802 Views

The man being hailed as a hero for reportedly shooting a gunman in Canada’s national parliament is Kevin Vickers, who, as the holder of the post of sergeant-at-ams, is officially responsible for safety and security within the grounds of the building.

The role’s ceremonial element has resulted in something of a public profile for Vickers – in black robes, he carries a ceremonial gold mace into the House of Commons before every sitting. But he also has very real powers in relation to controlling access to the building.

A former officer in the Royal Canadian Mounted Police (RCMP), where he led high-profile investigations relating to murder and drug importations, Vickers, 54, has held the post since 2006.

On his LinkedIn page, Vickers, from Newcastle in New Brunswick, lists his functions in his role as including overseeing security, food services, transportation, printing and mail servcies with a team of 1,000 employees.

He spoke publicly last year of how he viewed Canada and his role after he was honoured by Sikhs when he moved to ensure that the community’s sacred kirpan was allowed in Canada’s legislature in the face of a motion by Quebec nationalists calling for its prohibition.

“I see your wearing of the kirpan, especially in our parliamentary buildings, as exactly that, respecting your dignity,” he told members of the World Sikh Organization of Canada.

“But just as the kirpan issue came before us last winter, we are reminded how vigilant we must be to not only defend but promote the practices, cultures and religions of all peoples.

He also recalled what he said during his interview for his job when he was asked what he wanted from it, saying: “I told them that if they made me their sergeant-at-arms, there would be no walls built around Canada’s parliamentary buildings”.