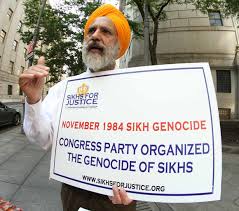 Comments Off on Seeking rehabilitation, 1984 victims write to candidates 441 Views

Ludhiana, Punjab: The 1984 Sikh genocide victims  under the banner of Ludhiana Sikh Migrant Welfare Board have issued a letter to four main contestants contesting from Ludhiana constituency, demanding proper rehabilitation for the victims.

The genocide victims have asked the candidates to raise their issues before the party lines and convey their stand to the board within seven days.

In the letter signed by chairman of the board Kartar Singh Patna, president Kanwaljit Singh Monga and general secretary Ajit Pal Singh, the victims have raised the issue of flat allotment to the genocide victims, mentioning that the government had allotted flats to only 10% of the victims till date.

“Many of the victims, who had applied in 2000, have been awaiting allotment till today,” the letter reads, adding that the hundreds of government flats in Ludhiana were under illegal occupation of the selfstyled leader of riot victims. “In 2006, the Prime Minister had announced 2 lakh grant, which was to be given to each genocide victim family who had migrated to Punjab aftermath of the genocide. In Ludhiana, the nexus between corrupt officials and self-styled leaders have resulted in big irregularities in releasing of the said grant. Many genuine bonafide victims have been deprived and many non-genocide victims have received the grant. Even the vigilance inquiry in 2010 found numerous frauds and recommended probe,” it reads.

The office bearers asked the candidates to clear their stand on the constitution of the state and national boards for redressal of grievances.