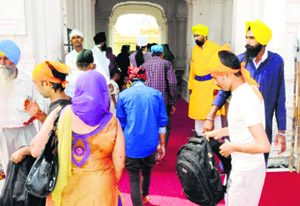 Comments Off on Security around Golden Temple up 471 Views

Amritsar, Punjab: To strengthen security at the Golden Temple in view of the recent threat call, the SGPC has made it mandatory for the pilgrims to produce their identity proof for getting accommodation in its “sarais” (inns). There are five major SGPC “sarais” in the vicinity of the Golden Temple. Though the norm regarding the identity proof was already there, it was not strictly implemented in the past.

The SGPC has already banned handbags on the Golden Temple complex. The guards deployed at the gates ask pilgrims to deposit such bags in the baggage room. The guards also keep a close eye on suspicious elements. They can be seen frisking people at the gates.

SGPC secretary Manjeet Singh said the police were also trying to trace the phone number from which a threat call was made to the SGPC. He said they had asked their task force members to strengthen vigil in and around the Golden Temple complex. The team deployed in the CCTV control room had also been asked to remain extra cautious, he added.

He said the staff at the SGPC “sarais” had been directed to provide rooms only to those pilgrims who produced their identity proofs. The effort was to take all possible measures to ensure safety and security of the pilgrims visiting the holy shrine, he added.

Darbar Sahib manager Partap Singh said they were taking no chances. Even the baggage was checked in case of any suspicion, he said.

According to sources, policemen in civvies have also been deployed around the shrine. A close vigil is also being maintained in the vicinity of SGPC inns.

Police Commissioner Jatinder Singh Aulakh said they were trying to trace the number from which the SGPC received the threat call. He ruled out the involvement of any terror outfit in the incident and said the security had been beefed up around the shrine.

Previous: SGPC sets up camp in Srinagar
Next: US lawmakers disappointed over FIBA decision on Sikh players