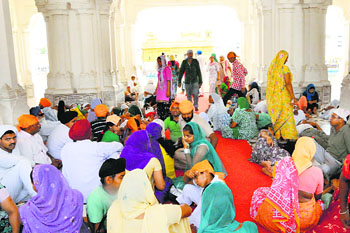 Scorching heat no deterrent for devotees

Comments Off on Scorching heat no deterrent for devotees 619 Views

The SGPC has made special arrangements to facilitate the pilgrims in view of harsh summers. A huge “shamiana” has been erected in front of the Darshani Deodhi as most of the times the queue of pilgrims goes up to Akal Takht. Besides, water cooling fans have been put up to provide succour to the devotees. A weather shield is already in place over the causeway leading to the Golden Temple.

The pilgrims are, however, facing a tough time in getting accommodation in this peak season. A number of them can be seen lying either in the waiting area of the inns or the “parikarma” of the Golden Temple.

Bachhitar Singh from Ambala said: “All sarais near the shrine are packed to capacity. Though there are a number of hotels around, we cannot afford it. We will now spend the night in the ‘parikarma’.”

Rajkumar from New Delhi said they had to stay put in “parikarma” with their children and elderly as they could not get accommodation in any sarai.

There are many pilgrims who voluntarily opt to stay at “parikarma”. “We usually come as a part of a jatha from our village and prefer to spend night out in the open,” said Kirpal Kaur from Ropar.

Though there are about 150 hotels around the Golden Temple, Walled City Hotel Association Chairman Satnam Singh Kanda said none of these witnessed full occupancy even in the peak season.

“While the pilgrims from Punjab don’t prefer hotels as their stay is short, those on the way to Vaishno Devi don’t want to shell out money for hotel accommodation and wish to board the next available train,” he said.

Kanda said most of the hotels were budget hotels where a non-AC room was available for Rs 400 and an AC room for Rs 800. He said instead of promoting the hotel industry, the state government had burdened it with 8 per cent luxury tax.

Not many pilgrims prefer to stay at Baba Deep Singh Ji Niwas and Mata Bhag Kaur Ji Niwas as these were a little far from the Golden Temple. The SGPC is coming up with another inn at a cost of Rs 25 crore. Named Sargarhi Niwas, the inn will have 238 rooms, besides halls. The 10-storey building will have a capacity to accommodate 2,000 pilgrims.

Previous: Will restore gurdwara in Lahore: Sarna
Next: 7 Reasons Why You Should Use a Wooden Comb