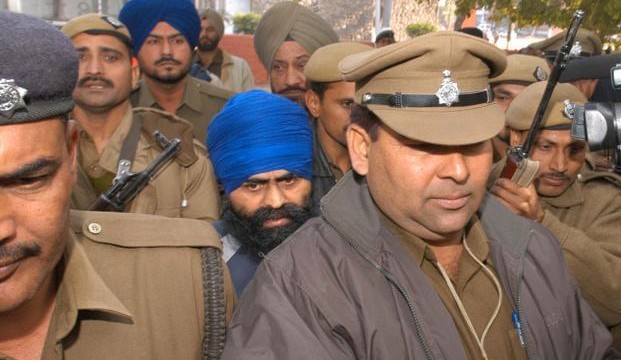 New Delhi: The Supreme Court today stayed the execution of Devender Pal Singh Bhullar on a petition filed by his wife Navneet Kaur seeking commutation of the death penalty awarded to him in the 1993 bomb attack case.

A four-member bench headed by Chief Justice P Sathasivam also issued notice to the Centre and the Delhi Government seeking their response to Kaur’s curative petition. The apex court directed the Institute of Human Behaviour and Allied Sciences (IHBAS), where Bhullar is getting psychiatric treatment since 2010, to submit a report within a week on his medical condition.

In her petition, Kaur has contended that Bhullar was not even recognising her and was unable to “maintain his personal dignity and hygiene” as he was suffering from “severe psychosis” and “is completely mentally retarded” after undergoing “inhuman suffering,” waiting for death each day for nearly 17 years. Besides his mental status, Kaur has also cited over eight years of delay in the rejection of his mercy plea by the President as the reason for reducing his sentence to life term. “The MHA, Law Ministry and the previous Congress government in Delhi are to be blamed for this. Various agencies kept sitting on the files pertaining to the case,” said Maninderjit Singh Bitta, who was injured in the bomb attack.