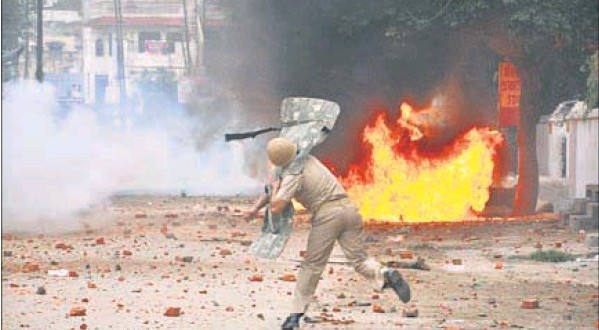 Comments Off on Saharanpur violence: SGPC to visit UP, assess situation 561 Views

Saharanpur, India: In a grim reminder of the communal violence in Muzaffarnagar last year, three people were killed and many others injured when clashes broke out between two communities in Saharanpur on Saturday over possession of property near a gurudwara.

Following the clashes, the Shiromani Gurdwara Parbandhak Committee (SGPC) on Saturday announced the formation of a four-member panel which will visit Saharanpur to make a spot assessment of the situation.

The panel has been directed by SGPC chief Avtar Singh Makkar to immediately leave for Saharanpur.

The panel was formed soon after Akal Takht Jathedar, Giani Gurbachan Singh discussed the violence that broke out in Saharanpur with Makkar.

Briefing the media, Makkar said the incident occurred at the Singh Sabha gurdwara near Saharanpur.


Makkar said that some miscreants first attacked shrine management members and then pelted stones at devotees sitting inside the gurdwara.

He also said that the miscreants used firearms and other weapons to attack Sikhs.
“It seems the miscreants were bent upon creating communal tension between Sikhs and Muslims. The two communities had been residing in Saharanpur peacefully,” said Makkar.

Makkar spoke to the UP DGP and the Saharanpur police commissioner and asked them to ensure the safety of Sikhs.

Sources said that in view of the situation, the sector scheme — implemented to maintain law and order during the Kanwar Yatra — was being continued.

SSP HN Singh told HT, “We have adequate police force in the district to deal with any situation..” He said that additional force had been deployed at sensitive and hyper-sensitive locations in the district.