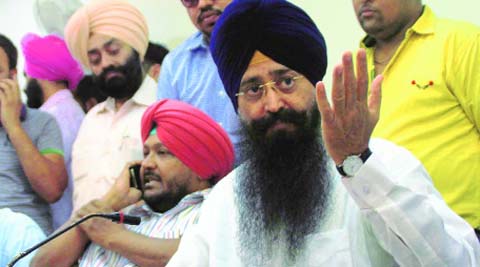 SAD warns of trouble if gurdwaras not vacated

Kaithal, Haryana: The Haryana unit of the Shiromani Akali Dal has urged the district administration to get the Chhati and Nauvi Patshahi gurdwaras in Guhla “freed from the control” of the group which “forcibly occupied” it on Wednesday. A delegation of the party unit, led by its president Sharanjit Singh Sobha, met deputy commissioner NK Solanki and handed him a memorandum of its demands. The party’s general secretary, Sukhbir Singh Mandi, also accompanied the delegation.

Talking to reporters, the delegation members said the “forcible occupation” of the gurdwaras was only possible with the active assistance of the government and the administration. “It wasn’t feasible for the intruders to take such a step on their own. The Haryana government is bent on dividing the Sikhs for the sake of political gains,” they added.


The SAD delegation members claimed the gurdwara employees were coerced to quit the premises. “The intruders broke open the gurdwaras’ locks and caused a lot of damage to property. The Sikh community won’t tolerate such mischief by the government and will take appropriate steps to undo the wrong,” they said.

Later, Solanki said the administration did not have any role in Wednesday’s incident. “It was a matter of dispute between two religious groups. The administration is keeping a strict vigil on the situation and is determined to maintain law and order in the district,” he added.