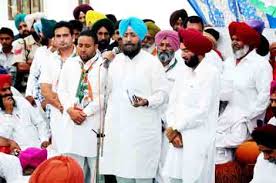 Bajwa said though the manifesto spoke of preserving and promoting the interests of minorities, its main agenda was making Narendra Modi the next Prime Minister.

The PPCC chief said while Modi was yet to own moral responsibility for the 2002 Gujarat genocide, AICC president Sonia Gandhi and Prime Minister Dr Manmohan Singh had apologised for the November 1984 genocide.

“Akali Dal president Sukhbir Singh Badal has forgotten that his party, under the presidentship of Parkash Singh Badal, had made a similar promise in its manifesto for the 1997 Assembly elections. Within months of coming into power, Badal backtracked on the plea that it would re-open old wounds… Sukhbir Badal should explain a why is he befooling the people on this sensitive issue once again,” Bajwa said.

Bajwa pointed out that issues such as the transfer of Chandigarh to Punjab, river waters and the federal structure had been part of the Akali manifestos for years. The party had done nothing on these issues when it was part of the NDA Government at the Centre, he said.

“The Akalis must stop misleading the people time and again as they have seen through the SAD gameplan,” Bajwa said.

On the issue of industrial concessions to Punjab, Bajwa said: “Sukhbir must admit before the people that these concessions were given by the NDA Government in which the Akali Dal was a partner. The Akali ministers did not raise any objection then. He should tell the people that he was Union Minister of State for Industries at that time.”

Bajwa alleged that corruption had increased under the SAD-BJP Government. He referred to the sand and gravel mafia operating in the state. He said the manifesto promised to promote trade with Pakistan and Central Asian countries through Pakistan. “Would this be possible with the jingoistic rhetoric being resorted to by Modi against the neighbours,” Bajwa asked.

Gurdaspur: Bajwa on Monday visited the Mallakwal church in the Fatehgarh Churian Assembly segment that was vandalised by miscreants on Sunday. Flaying the SAD-BJP Government, Bajwa said the law and order machinery had broken down. If the miscreants were not arrested within 72 hours, the Congress would lay a siege to the Fatehgarh Churian police station, Bajwa warned.

Sukhbir must admit that concessions to hill states were given by the NDA Government. The Akali ministers did not raise any objection then. Sukhbir was Minister of State for Industries at that time

While Modi is yet to own moral responsibility for the 2002 Gujarat genocide, AICC president Sonia Gandhi and Prime Minister Dr Manmohan Singh had apologised for the November 1984 genocide

The manifesto promises to promote trade with Pakistan and Central Asian countries. Would that be possible with the jingoistic rhetoric being resorted to by Modi against the neighbours?~Partap Singh Bajwa, ppcc chief