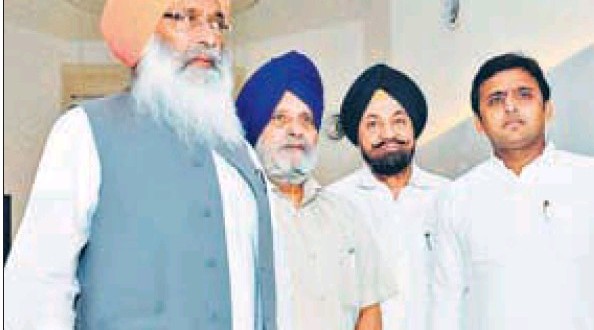 SAD delegation calls on UP CM over Saharanpur clash

UP political pensions minister Rajendra Chowdhary, principal secretary to the CM, home secretary and the DGP were also present at the meeting.

Dhindsa said the agenda of the visit was to ensure protection of interests of Sikhs in UP besides extending an appeal to the community to maintain peace and communal harmony.

The delegation also put forth a demand before the UP chief minister to provide adequate compensation to Sikhs, who became victims of the violence. Dhindsa said it was also demanded that the construction of the gurdwara should be allowed as per the norms under the ambit of law.

According to Dhindsa, Yadav assured them that the law and order situation at Saharanpur was under control and the state would ensure and protect the interests and rights of both groups. “The UP CM also assured us that the state would announce compensation to the Sikhs who had been victims of violence,” added Dhindsa.

Both Yadav and Atwal appealed to the people not to pay heed to rumours and maintain peace.

The chief minister also pointed out that the sudden eruption of violence was brought under control by the timely action of district administration and the state government TO PROTEST IN CASE SIKHS NOT HEARD: GK

Delhi Sikh Gurdwara Management Committee (DSGMC) president Manjit Singh GK on Monday said he would lead a protest against the UP government in case the concerns of the Saharanpur Sikhs were not taken up.

“Their (Sikhs’) burnt properties are being undervalued for compensation and the state government is contemplating to register cases against Sikh victims,” GK said, demanding intervention of UP CM Akhilesh Yadav.

He said the government was duty-bound to give compensation to all affected with violence, as till now the compensation had been declared only for three people, and not for those whose shops were set on fire.

Phoolka said, “Due to an increase in communal riots in the recent past, it’s absolutely necessary that the bill against communal violence, pending in the Rajya Sabha for eight years, should be passed at the earliest. It was promised by the UPA government in the 2004 and 2009 elections, but they had failed to pass the bill.” The UP government should award full compensation to the owners of the vehicles and shops which had been burnt in the riot, said Phoolka, adding that at present, the government had declared only a meagre compensation for the loss of property.