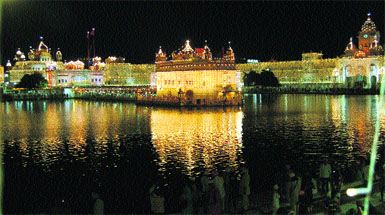 Rush for trains about to begin

Though the ticket-booking counter at Amritsar railway station is witnessing a rush of passengers ahead of Diwali, the movement of passengers is expected to pick up in a couple of days.

A sea of devotees descend on the city of the Golden Temple to celebrate Diwali. A beautifully illuminated Golden Temple is a delight to watch and devotees express their devotion by paying obeisance.

A majority of these devotees arrive by trains while a sizeable number of them come in their private vehicles and others by air.

Railway officials said festival bookings were going on and many of these passengers were coming from Jammu to catch connecting trains to reach their destinations. They added that the hustle and bustle would pick up by Monday.

The officials said a considerable number of pilgrims and tourists would arrive to see Diwali here. At the same time, a high number of migrants working here in industries, shops, agriculture fields, the construction and other sectors would leave for their homes in UP, Bihar, Jharkhand and other states.

Kishan, a passenger at the railway station, said his group comprised eight persons and all of them belonged to various villages of Motihari district. He said they were working as construction labourers here and were travelling to their home district by the Katihar express. They got the tickets booked in advance to avoid unnecessary hassles they had undergone last year. He added that they wished to reach their homes ahead of Diwali to celebrate the festival in full.

People in large numbers are queuing up at the railway station for heading towards their homes to celebrate the festival of lights.

Railway officials stated that the trains bound for UP and Bihar were particularly crowded as there was a lot of migrant population engaged in different activities in the city.

Besides, a large number of pilgrims also visit Amritsar to witness Diwali celebrations at the Golden Temple. Their arrival picks up pace a couple of days before the festival.

Previous: SGPC meet to decide on aid to J&K Sikhs
Next: 84 genocide is issue in California race