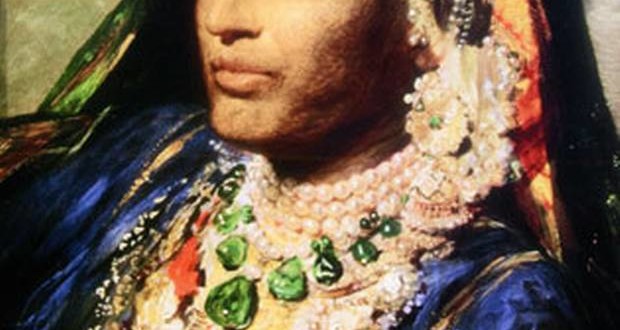 Revealed: the woman who terrified the British Empire

Comments Off on Revealed: the woman who terrified the British Empire 1,048 Views

London, UK: On 1 August 1863, shortly after 6:15 in the evening, a frail and partially-blind queen who had spent much of her life raging against the British Empire, died in her bed on the top floor of a Kensington townhouse.

It was a peculiar and remarkably quiet end for a woman once the scourge of the British Raj in India. Only 15 years earlier, Jind Kaur, the Maharani of the Punjab, had encouraged the Sikh Empire to wage two disastrous wars against the British which led to the annexation of the Punjab and Jind being torn from her son when he was just nine-years-old.

Adopted by a dour colonial surgeon, that son, Duleep Singh, swiftly shed his Punjabi customs, converted to Christianity and moved to England to live the life of a respectable country squire, shooting grouse on his estate and hosting decadent parties for Britain’s Victorian elite.

The “Black Prince”, as he was known in London, became firm friends with Queen Victoria, only to fall from grace after he was caught trying to persuade Russia to invade India and return his kingdom to him. His tale has been well documented.

But for the first time his mother’s remarkable life has been uncovered by a British historian, Peter Bance, who publishes his findings this week in the book Maharajah Duleep Singh – Sovereign, Squire And Rebel.

While researching a tome on the Duleep Singh family, which lived in exile on a sprawling country estate near Thetford, Norfolk, Mr Bance stumbled upon the gravestone of Jind Kaur in the catacombs of the Kensal Green Dissenters’ Chapel. Historians had assumed that the Maharani’s cremation occurred in India but here was a simple white marble tombstone in London with her name on it.

As cremation was illegal in Britain at the time it appears that the Maharani’s remains were kept in the chapel for nearly a year while Duleep arranged for her to be taken home. The astonishing relic of a person who made no secret of her dislike for the country where she eventually died lay hidden for more than a century.

Mr Bance has dug into who Jind Kaur really was, why she ended up dying in the capital of a country that was once her sworn enemy and how, as her life slipped away in a cold London townhouse, she reawakened her son’s royal heritage and inspired him to take back his lost kingdom.

“It’s an amazing find because Jind Kaur was only buried in Britain for little over year and yet someone went to the trouble of creating this very ornate gravestone for her,” says Mr Bance. “The inscription is partly in English and partly in the Sikh Gurmukhi script and what makes it unusual is that very few people in Britain at the time would have been able to translate Gurmukhi, let alone carve it into marble. She is the first documented Sikh woman in Britain.”

To say that Jind Kaur was a thorn in the side of the East India Company would be an understatement. She was born into humble origins, the daughter of the Royal Kennel Keeper at the Sikh court in Lahore, but she was ravishingly beautiful and soon caught the attention of the Punjab’s greatest ruler, the one-eyed Ranjit Singh.

Having kept the British at bay for decades, Ranjit’s empire began to crumble with his death in 1839. Following a series of bloody succession battles, Jind emerged as regent for Duleep who was less than a year old when his father died.

Concerned about the instability (and attracted to the kingdom’s fabulous wealth) Britain began preparing to take the Punjab, goading the Sikh armies into two wars that eventually led to the disappearance of an indigenous Asian empire that stretched from the Khyber Pass to Kashmir.

Jind was instrumental in organising the Sikh resistance, rallying her generals to return to battle and plotting rebellion once the British finally took over the Punjab in 1849.

To halt her influence on the young Duleep, the Punjab’s new colonial masters dragged the Queen away from her son and imprisoned her. The British press began a smear campaign against the Maharani, labelling her the “Messalina of the Punjab”, portraying her as a licentious seductress who was too rebellious to control.

In a final act of defiance Jind Kaur escaped her jailers dressed as a slave girl and trekked 800 miles to Nepal where she was given begrudging asylum and a place in Sikh folklore as a national hero.

She was only allowed to see her son 13 years later when he returned to Kolkata for a tiger-hunting trip. Duleep asked to bring his mother from Kolkata to England. The British Government decided the last Queen of the Punjab no longer posed a threat and gave him permission.

But a number of historians now believe it was Jind Kaur’s brief reunion with her son in the country she despised that rekindled Duleep’s desire to take back his kingdom.

“In a way she had the last laugh,” says Harbinder Singh, director of the Anglo-Sikh Heritage Trail. “When you look at the life of Duleep Singh the moment where he began to turn his back on Britain and rebel was immediately after meeting his mother. The British assumed that this frail looking woman, who was nearly blind and had lost her looks, was no longer a force to be reckoned with. But she reminded her son of who he was and where his kingdom really lay.”

In the end, Duleep’s attempts to persuade the Tsar of Russia to invade India backfired spectacularly because British spies had followed his every move. Publicly humiliated, Duleep lived his final years in a Paris hotel room desperately seeking the forgiveness of Victoria.

“The whole family’s story is desperately tragic,” says Mr Bance. “None of Duleep’s children gave birth to an heir and his lineage died out within a generation. But what gives me some comfort is the idea that, just before she died, this frail but formidable woman made him remember who he was.”

Previous: SGPC for creating awareness about Sikh symbols in US
Next: Open conclusion’ at inquest into Gurkiren Kaur Loyal’s mystery death in India.