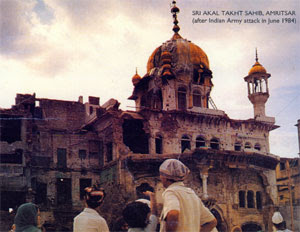 New York, USA: This week, from June 1st to June 6th is the 30th anniversary of Indian army attack on Sri Darbar Sahib (Golden Temple), Amritsar, Punjab, the sanctum sanctorum of the Sikhs and dozens of other historical Gurudwaras across India.

This army attack codenamed ‘Operation Bluestar’ resulted in the death of thousands of Sikh pilgrims including women and children. The full-scale army attack took place on June 3rd, which was the martyrdom day of fifth Sikh Guru, Guru Arjun Sahib. On this special day, thousands of Sikh pilgrims gather at Golden Temple to offer their prayers. Gunship helicopters, heavy artillery, and tanks were indiscriminately used in the attack. The highest temporal seat of Sikhism- Akal Takhat was reduced to rubble. Sikh archives with thousands of rare manuscripts, artifacts and historical books was looted and burnt.

Later, dead bodies of those killed inside were carried away in municipal dump trucks and burnt in piles using kerosene oil. After this attack, the government failed to provide any list of people killed, post mortem reports and compensation to the relatives of the innocent killed people.
According to Former Chief Justice of the Supreme Court of India, S.M. Sikri, “Operation Bluestar is a massive, deliberate and planned onslaught to the life, property and honor of a comparatively small, but easily identifiable minority community.”

One of the survivors of this horrible ‘Operation Bluestar’, Pritpal Singh, a 24 years old sevadar, shares his bone chilling story. He was on duty at the time of the attack. He was inside the Guru Ram Das Serai, the pilgrims guest house. He narrated, how he had a hair-breadth escape, even after being lined up before the firing squad on June 6, after he had been arrested, stripped naked and his hands had been tied behind his back with his turban.[1]

The June ’84 Sikh Massacre was followed by another army operation in Punjab countryside codenamed as ‘Operation Woodrose’ during which thousands of Sikh youngsters were killed in fake staged encounters. This Sikh hunt continued with the nation-wide government sponsored pogroms of November 1984.

Thirty years later the wounds of ‘Operation Bluestar’ are still festering. The perpetrators of heinous crimes against the Sikhs in past 30 years had not been held liable and are roaming free.

Voices for Freedom (VFF) sympathizes with the families of those thousands of innocent pilgrims killed thirty years ago. We will continue our pursuit of justice to hold guilty accountable so that such atrocities never happen again.

To commemorate the 30th anniversary of June ’84, VFF other than co-sponsoring couple of events to mark the occasion will also be releasing a report soon named “1984 Sikh genocide Genocide”, shedding the light on the Genocidal approach of the Indian government against the Sikh community.